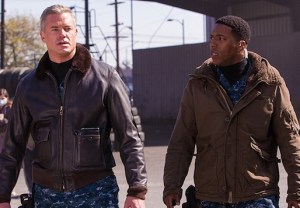 TNT’s The Last Ship entered its freshman finale with the promise of saving what’s left of mankind by bringing the cure ashore. That, however, was revealed not to jibe with the interests of the people currently in power on the mainland.

‎Having inoculated its crew, the Nathan James hacks into a satellite to scout out the megalab at Fort Detrick, where they plan to mass-produce the cure — only to discover that it (and only it) has been razed. No sooner is that mystery presented, the ship makes video contact with Mrs. Granderson aka Alisha’s mother (played by Alfre Woodard), who explains that the U.S. government has crumbled. She arranges to meet Chandler and his team at a dock in Baltimore, where they are observed from afar by warlord Thorwald (Titus Welliver) and a trusty sniper. The ominous-seeming men aim to take out Granderson during her meet-up, but never get a clear shot. Instead, Thorwald tells his man to contact an inside source for the 411 on the Nathan James and Chandler’s arrival on the mainland. Meanwhile, the genial Baltimore police captain pals with Slattery aboard the Nathan James.

Arriving at Granderson’s secure, state-of-the-art facility, Rachel marvels at the resources, only to eventually realize that the “vaccines” her scientists have been formulating are purposely toxic. Simultaneously, Granderson has an odd convo with her daughter about what kind of man Captain Chandler is, and whether he “follows orders.” Hmm….

Using Granderson’s radio room, Chandler makes contact with his father, who has sped past one of Thorwald’s barricades in the name of reaching the mysterious haven called “Olympia.” The Chandlers agree to rendezvous outside an auto repair shop, but Jed is gone by the time Tom gets there. Tom & Co. then make tracks for Olympia, an indoor arena to which the infected are flocking for “treatment.” There, Tom inoculates his father and kids, but learns that his wife Darien succumbed to the virus. He quickly realizes that the sick actually are being “put down” with the toxic cocktail, their bodies used to fuel the local power plant!

Concurrent with Tom’s discovery, back at the facility guards surround Rachel, as a wild-eyed Granderson defends her philosophy — “We can’t control who dies, but we can control who lives” and all that jazz. Meanwhile, the Baltimore cop single-handedly seizes control of the Nathan James, putting bullets in a couple of crew along the way. And as the finale closes, Chandler makes futile attempts to hail his ship from outside the horror show that is Olympia.

What did you think of the season finale? So are we to surmise that Thorwald is actually the good guy here, out to suppress Granderson’s power grab? (But how key of Season 2 players can they be if Welliver and Woodard both are headlining new series, Amazon’s Bosch and NBC’s State of Affairs? And does anyone doubt that Chandler’s wife will one day show up alive?