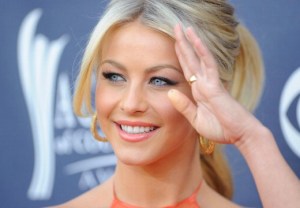 Should we brace for ABC to greenlight Keeping Up With the Houghs before Labor Day?

Hot on the heels of Derek Hough joining Season 3 of the network’s drama Nashville for a multi-episode arc, his sister Julianne appeared Thursday on Good Morning America to confirm the widespread rumor that she’s returning to Dancing With the Stars as a fourth judge for the show’s upcoming 19th season.

Hough rose to fame during five seasons as a DWTS pro — taking home the Mirrorball Trophy with Apolo Anton Ohno and Hélio Castroneves in Seasons 4 and 5, but failing to make the finals in her three subsequent seasons.

Following Season 8, Hough exited DWTS to pursue careers as a country music singer and movie actress, scoring roles in musicals like Burlesque, Footloose and Rock of Ages, as well as the Nicholas Sparks romance Safe Haven.

Asked why she’s returning to her reality TV roots, Hough said she’s looking forward to “the camaraderie between the judges and being part of the show again” — and assured GMA‘s hosts that she can be objective when it comes to critiquing her brother, who is entering his 13th season as a pro (with five wins under his belt). “It’s not necessarily about Derek,” Julianne argued. It’s about “the celebrity and what they can do to improve each week.”

Hough will be seated alongside the show’s long-running trio of panelists Carrie Ann Inaba, Len Goodman and Bruno Tonioli.

How do you feel about Hough as a fourth judge? Take our poll below, then sound off in the comments!