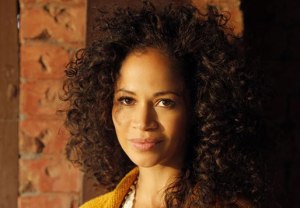 It looks like Lena Adams Foster will be out of the woods and back at the breakfast table in Monday’s summer finale of The Fosters (ABC Family, 9/8c).

TVLine spoke with Sherri Saum — who plays one half of the titular couple — about her character’s return to the workplace, meeting the twins’ birth mother and Callie’s adoption.

TVLINE | After everything that happened with the promotion, how does Lena feel about returning to work?
She got passed over for the principal job, but she knows the school is where she belongs. She’s an educator, she loves the kids, and as frustrating as bureaucratic politics can be, she wants to be there.

TVLINE | Stef’s come around to letting Jesus and Mariana meet Ana. Is Lena on the same page?
It’s a tough one because they all have resentment towards Ana, obviously, but Lena has a little extra because Ana had these beautiful children and she just threw it all away. Of course Lena is now [also] suffering the loss of Frankie and can’t imagine how someone could have a child and just leave them to fend for themselves. But she’s trying to do the right thing for her family and what they need.

TVLINE | Lena’s going to be meeting Connor’s dad this episode. I can’t imagine that’s going to go well.
That’s a very prickly meeting. Lena knows how he feels about Jude and she thinks that he is prejudiced and abusive in his treatment of Connor and his outlook on sexuality. She thinks it’s poisonous [but] she has to balance that with her job as a professional in the school, and it’s going to be a very sticky situation. TVLINE | It looks like Callie might be turning to Robert for some help this episode. Are Stef and Lena okay with that?
We left that up to her — as we do with many of the decisions that kids have to make. We want to respect her relationship, for whatever it is, with Robert and let her make those decisions. We feel secure in that Callie loves us and is a part of our family, and she’s not going anywhere. So we’re not going to impose any doubts that we might have on her. We just know that we want her to have access to all areas of her life.

TVLINE | Are we going to get an update on how Callie’s adoption is going?
At the end of the episode we have a new wrench in the plans for her adoption. It’s just one thing after another with that poor girl!

What are your hopes for The Fosters‘ summer finale? Drop a comment with your thoughts below.