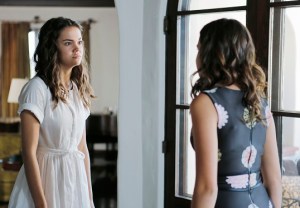 It was heartbreak city on Monday’s Season 2 summer finale of The Fosters.

The episode was titled “Someone’s Little Sister” — the name of Brandon’s band — but the message couldn’t have been any clearer: Callie most definitely does not fill that sibling role for Brandon, nor does Sophia fill that role for her.

With Rita unable to find someone willing to rent to a group home, Callie asks Robert to host a fundraiser for Girls United. But what do they tell people about their connection, he asks. After all, they really look alike, Sophia points out. Callie suggests they say they’re friends. (Um, Callie, I don’t know many teenagers who are friends with middle-aged men.) Robert is OK with whatever Callie decides and signs the abandonment papers so the Fosters can adopt her, so he’s good in my book — for now. Even his wife, who I initially thought was going to be trouble, is understanding and welcoming — maybe too welcoming, because Sophia has gotten very attached to her new big sis.

When Callie finally acknowledges Robert as her father in front of everyone at the fundraiser, Sophia reveals that she snatched the abandonment papers out of the mail and ripped them up. They can still be a family! Yay?

Callie’s face is a mixture of horror, anger and sadness. Another chance at finally having a family is snatched away from her. Things only get worse when Robert says that he can’t sign the papers again and abandon her for the second time. “I don’t love you!” Callie exclaims. “I will never live in this house with you. And I will never call you my father again.”

Props to Kerr Smith, who sells Robert’s anguish over losing his daughter and his relief at the idea that he may have a second chance. In another scenario, his refusing to “abandon” Callie would be seen as the right thing to do. He just wants her to be happy, Robert says.

“I won’t be happy. I’m never going to be happy,” Callie yells. She’s mad, but more than anything, there’s a dawning sadness to her realization. And for Sophia, Callie has these parting words: “You’re a spoiled, little brat.” A crying Sophia retreats to the bathroom — to hurt herself? — while Callie runs off and a worried Brandon chases after her. — Mariana and Jesus meet with their birth mother Ana. While it was Mariana’s idea to get together, it’s Jesus who ends up trying to comfort Ana after Mariana tells her she’s nothing to her. That, in turn, leads to a really touching scene between Mariana and Lena, who assures her daughter she could not love her more even if she gave birth to her.

“You carry a baby in your belly for nine months, but you carry your child in your heart forever,” Lena says. “That’s the only place that it counts. You do come from me. And from mom. Giving birth to you, that wouldn’t have made me love you any more than I do.” Sob, pass the tissues. (The Fosters hit the same heartstrings for me that the Cohens did on The O.C. when they took in and loved a teenager from Chino as one of their own.)

— Lena quits her job after getting into a dispute with the new principal over the bullying tactics of Connor’s dad against Jude. (The man also still spanks his son.) Jude then admits that he and Connor did do something wrong during the camping trip, but we don’t learn what it was. Hmm, would Jude view a kiss as “wrong”?

What do you think of The Fosters‘ finale twists? How are you feeling about the possible return of “Brallie”? And what’s your theory on what Jude and Connor did? Hit the comments and grade the episode via the poll below!