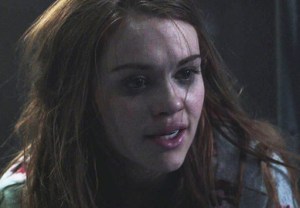 The Benefactor’s identity was finally revealed on Monday’s Teen Wolf, and it turned out to be the one person nobody was expecting. (Stop rolling your eyes, you did not guess this.)

Anyway, after accusing practically everyone they’ve ever met — including Lydia’s dead grandmother — the gang finally came face-to-face with the big bad, herself: Meredith! So not only is she alive, but I guess we also know why her hair is so big; it’s full of evil.

Lydia figured out Meredith’s big secret after cracking the final cipher — it was “Ariel,” Lydia’s childhood nickname — and following the trail, with Stiles in tow, back to Eichen House. They thought everyone on the third part of the dead pool had committed suicide, but they were really “helped” to their deaths by an unfriendly doc, who eventually met his own demise. (It’s the circle of life!)

Meanwhile, in other parts of Beacon Hills… MAN ON FIRE | Quick question for the group: What is Deputy Parrish? Dude survived a car explosion — kudos to whichever TW writer was able to organically incorporate fiery shirtless-ness into a Parrish scene, by the way — and beat the crap out of his attacker, so let’s not even pretend like he’s just our friendly neighborhood law man anymore. So what is he, some kind of fire-starter? A phoenix? The true evolution of Charmander?

THE $18 MILLION BOY | To say that Liam’s buddy Mason became “suspicious” of his new friends this week would be a bit of an understatement. After seeing Scott, Malia and Liam seemingly crippled by music at the annual bonfire — sadly, no, the beats were not being spun by Teen Wolf‘s own DJ Cole Plante — he jumped right in to save the day. (Does Stiles suddenly have some competition for Most Useful Human? Also, why did Liam’s death pool price tag skyrocket to $18 million? And what, was Cole Plante busy or something?)

CONFESSIONS | Scott and Derek also had a brief, albeit heartbreaking, honesty sesh this week; Derek came clean to Scott about his impending power outage, while Scott told Derek about his name being one of the cracked ciphers. As we saw, the dead pool is merely written in ink — not set in stone — but I’ve got to say, things still aren’t looking great for Big D.

Teen Wolf fans, were you surprised to learn that Meredith is the Benefactor? What do you think Deputy Parrish really is? And did you even notice Kira was M.I.A. this week? Watch our interview with the cast, then drop a comment with your review of the episode below.