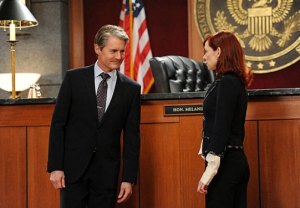 Reunited and it feels so… quirky.

Kyle MacLachlan is set to reprise his role as oddball attorney Josh Perotti in The Good Wife‘s upcoming sixth season.

MacLachlan’s comeback will coincide with the previously-announced return of Carrie Preston’s Elsbeth, with whom his character generated major sparkage (both in the courtroom and out).

Will lightning strike twice for the loopy lawyers?

“They haven’t sent me any scripts [yet]… the only thing I know is that he and I have a little sparring thing that we do,” Preston told TVLine Saturday at the Creative Arts Emmy Awards. “I am looking forward to getting back in the ring with him for another round.”

MacLachlan has a busy fall ahead of him. In addition to The Good Wife, the Twin Peaks vet is set to recur on Marvel’s Agents of S.H.I.E.L.D. as Skye’s father.