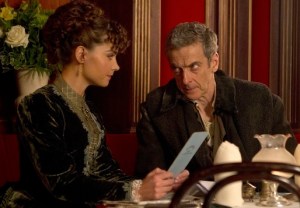 Don’t look for any lingering Matt Smith-isms when Peter Capaldi debuts as the well-traveled title character in the Season 8 premiere of BBC America’s Doctor Who (airing Saturday, Aug. 23 at 8/7c). Executive producer Steven Moffat said he and his new leading man deliberately avoided picking up tics and habits from the “Eleventh Doctor” as they fashioned a regenerated “No. 12.”

Co-star Jenna Coleman recalled filming her first few episodes opposite Capaldi and, in instances where she expected the Doctor to “dance or be running around the console,” Capaldi would do the opposite. “He’d say, ‘Actually, no, I’m just going to stand here.’ Instead of coming to the room, he let the room come to him. He was really bold and brave and made those changes. That was Peter finding his own path.”

As Moffat noted, though, the regeneration process is an inherently disorienting one. “What would it be like if you were Matt Smith one moment and Peter Capaldi the next?” he reasoned. “It must be frightening — especially when you look at your best friend in the whole world, the person upon who you’re anchored — and they don’t see you. They literally look right through you and see someone else.”

Expect that unanchored feeling to cause some serious communication gaps between the Doctor and his companion in the Season 8 premiere — titled “Deep Breath” — and a little bit of wibbly-wobbly behavior in Capaldi’s Time Lord.

Below, four more teases from Moffat, Capaldi, Coleman — and intel from a screening of “Deep Breath” put on by BBC America in New York City on Thursday morning.

No. 12 Is Informed by Other Classic Crime-Solvers | Moffat said that the Doctor’s fogginess in the Season 8 premiere was, in part, an homage to an old Columbo episode he’d seen in which Peter Falk’s detective blithely forgot the details of an intersecting case from a long-ago season. “He’s 2,000 years old,” Moffat said of the Doctor. “He’s forgotten a whole lot of time!” As for concerns about whether fans would embrace Capaldi after three seasons of Smith as their leading man, Moffat said he didn’t feel like he needed to do a hard sell. “You never get bored of some things. It’s like James Bond introducing himself — you want to see it happen again,” Moffat argued. “A new Doctor is just exciting.”

Don’t Hold Your Breath for Another Doctor-Clara Smooch | Coleman said that it’s been exciting figuring out “how this dynamic is going to work now” — not only between the Doctor and his companion, but between herself and Capaldi, too. “Deep Breath,” however, has a rather unambiguous moment where Capaldi’s character tells her — or perhaps tells himself — “Clara, I’m not your boyfriend.” Moffat added that as No. 12 journeys through Season 8, he will “discover things about his own personality that aren’t necessarily welcome.”

Old Friends Return — and Flirt in New Ways? | Madame Vastra, Jenny and Strax are back — and in grand form — in the season premiere. But don’t be surprised if/when one of the band of three takes his or her flirtation with Clara to new and amusing levels.

Old Enemies Will Be Back, Too | As a lifelong Doctor Who fan, Capaldi was particularly excited to work alongside the extermination-minded shorties. “You think you know all about Daleks coming in, but there’s a man inside a Dalek, and another man with a control box controlling all the lights, and a man off the corner doing the voice,” Capaldi explained. When he finally heard the word “DOCTOR!” in that menacing, mechanical voice, Capaldi recalled that he actually swore with delight. “And then it goes off and bumps into the wall.”