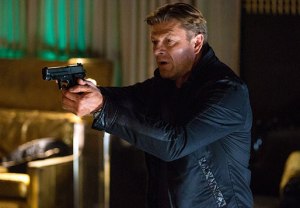 Martin Odum doesn’t just go undercover in TNT’s Legends, which premiered Wednesday night – he becomes his covers, burying himself in the fabricated backstories and character quirks that come with the job.

However when Odum (played by Game of Thrones‘ Sean Bean) returns home after a months-long deep-cover assignment, a mysterious stranger tells him that what he presumes is his true identity is just an elaborate “legend” as well. Unfortunately, Odum can’t dispel that accusation since he’s beginning to unconsciously slip in and out of the many personae he’s created over the years.

But that’s not all that happened in the series premiere. Before you tell us what you thought about Legends, let’s recap:

THE TALENTED MR. ODUM | FBI boss Yates (The Practice‘s Steve Harris) and Odum’s new partner Crystal (Heroes‘ Ali Larter) argue about letting the veteran agent work another case. When Crystal cites three shrinks who found him unfit for duty, Yates focuses on the fourth, who hailed Odum as “the most naturally gifted operative” they’ve got. (Sounds like he’s a glass quarter-full kind of guy). Having lost the battle, Crystal introduces Odum to one of the techs they’ll be working with, Maggie (Veronica Mars‘ Tina Majorino), who quickly notes their similar military brat childhoods as an explanation for Bean’s lack of American accent. (Well-played, TNT.)

THE STING | The secretive “founding father” (Zeljko Ivanek, of course) of the Citizens Army of Virginia wants to meet Lincoln Dittman, one of Odum’s “legends.” When Odum’s asset is late to the meet-up, Crystal is forced to go undercover as a stripper so she and her partner can figure out a new game plan. Their covers are nearly blown, before Odum does “what he does best,” spinning a backstory that the tech team works to verify with each word. Later ,as the “founding father” outlines his big, bad, bomb-filled plan, one of his men picks up Crystal on his radio frequency — this time, Odum’s cover really is blown. As FBI agents swarm the hideout, Odum faces off against the “founding father” and the detonator he’s holding. He quickly disarms the man, having figured out that much like other villains, he’s too scared to actually die for his cause. (And so, Sean Bean doesn’t die. Huzzah! Yet.)

DEEP COAT | Odum has Bobby — the team’s other tech — investigate security footage of the hooded mystery man who contacted him, so he can figure out the guy’s identity. Alas, Bobby winds up dead for his efforts. Odum nonetheless makes contact with the man, agreeing to meet him at the train station. But just as he gets there, the stranger is stabbed in the gut and left for dead. As Odum demands answers, the dying man tells him to take a book out of his pocket. Odum does so, before hopping on the first departing train.

No doubt Odum’s quest for his “true” identity will become central to the series as Legends goes on, slowly affecting everyone around him. And with Bean heading a cast full of familiar faces, not to mention the weekly procedural element, the show offers an entertaining summer viewing option.

That’s what we think, but what’s your take? Grade Legends via the poll below, then hit the comments to back up your choice.