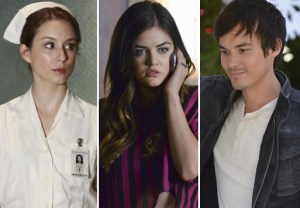 ABC Family on Monday released a whopping 49 (yes, 49!) sneak-peek photos from the Aug. 26 finale, giving us a taste — more like a small meal, actually — of how we can expect our summer in Rosewood to come to an end.

Before you flip through our gallery of photos, here are some highlights to look out for:

* Several characters — including Emily and Paige — are seen putting up Christmas decorations, no doubt in anticipation of December’s special episode, in which “A” spreads some holiday fear in Rosewood.

* Caleb and Hanna are seen having a nice, quiet — and hopefully booze-free — chat by the Nativity scene.

* Ezra and Aria also share a few nice moments, as Ezra… carves a pumpkin? (I thought we were getting ready for Christmas.)

* Wait, Ezra is also seen bringing (pumpkin?) pie to Aria’s house. Could the Montgomery family have invited him over for Thanksgiving dinner?

* Who else is excited to meet Mona’s mom? If the apple doesn’t fall far from the tree, she should be a bucket o’ crazy.

Lastly, let’s talk about the one person not pictured in the gallery: What do we think Alison will be up to in the finale? We know she’s preparing to mobilize an anti-Liar army after they turn their backs on her, but who will she end up recruiting? Browse the gallery, then drop a comment with your predictions below.