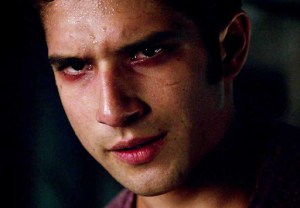 Stress, dizziness and even occasional vomiting are all natural side effects of taking the PSATs. (Trust me, I’ve been there.) But a deadly, airborne virus? That’s a nightmare only Teen Wolf could cook up.

Monday’s episode found Scott, Malia and Kira stricken with a nasty poison, courtesy of yet another Benefactor assassin. The trio was quarantined in the Hale vault — because everything always leads back to damn vault — but isolating them from the rest of the school didn’t exactly solve their problems. In fact, I’m pretty sure it made them worse. The virus-wielding assassin turned out to be a faux PSAT proctor with a penchant for pointing his gun at poor, unsuspecting kids — specifically kids whose names rhyme with “Smiles.” But the evil proctor proved to be no match for Papa McCall, who blew a hole right in the dude’s forehead. Blood everywhere. It was awesome.

But things became considerably less awesome when Stiles was finally reunited with Malia, as she’d learned a little something in their time apart — like the fact that she’s a freaking Hale! The episode ended with Malia walking away, hurt and betrayed, as Stiles remained alone on the ground, totally helpless to the situation that could very well end their relationship for good.

WHAT’S THE TEA? | Fortunately, it didn’t take long for the gang to discover a miracle cure in the form of a rare tea ingredient; and wouldn’t you know it, the “rare” ingredient was right there in the Hale’s vault! It had been a gift from Satomi — who’s not only alive, but also a total badass — to Talia, who used to drink it when Derek was merely a pup. (Side note: Is anyone else curious why we’re delving so deeply into Derek’s past this season? It feels like they’re bringing his story full-circle to prepare for, or at least make us think they’re preparing for, his untimely-yet-still-sexy death.) At least we got some cute Derek/Braeden moments this week, though I’m still looking forward to the sexy/naked moments we saw in the midseason trailer. ARE YOU THERE, MEREDITH? IT’S ME, LYDIA | While everybody was busy dying at Beacon Hills High, Lydia was attempting to have a heart-to-heart chat with the late, great Meredith. “I’m sorry,” Lydia said to the record player or to thin air or to whatever. “I wish I could have helped you.” Not much else came of the one-sided conversation, though Lydia did creepily match a photo she found among Meredith’s belongings to the corner of the room she was standing in. (At the risk of sounding like I don’t follow this show, does anybody know what that was all about?)

“OH, BOBBY” | Last, but certainly not least, is it possible that Coach Bobby Finstock is more than the one-dimensional zing-bot we’ve taken him for during the past four seasons of Teen Wolf? Lydia’s mom seemed awfully worried about him at the top of the hour, fearing that he’d fallen off the wagon after remaining sober for 15 years. (Um… Do these two have a history we know nothing about? Color me curious; I must know more!)

OK, Teen Wolf fans, let’s talk: Is this really the end of Stiles and Malia? What was up with Meredith’s creepy photo? And could Lydia’s mom have a history with the coach? Watch our video interview with the cast below, then drop a comment with your newest theories.