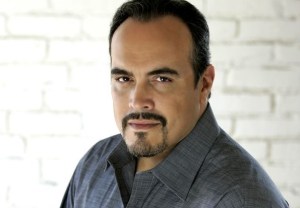 The Mob is invading Gotham.

In the Batman mythology, Maroni — who was played by Eric Roberts in The Dark Knight — is one of the city’s most dangerous gangsters and among the caped crusader’s first enemies. He is also infamous as the man responsible for disfiguring DA Harvey Dent, leading him to transform into Two-Face.

In Gotham (debuting Sept. 22), Maroni is striving to gain more territory, putting him on a crash course with rival Falcone (played by John Doman) for control of the city.

* Mark Moses (Mad Men) and Indian actress Nimrat Kaur will recur on Season 4 of Homeland, per The Hollywood Reporter. Moses will play Dennis, a debauched expat who is teaching political science at Islamabad’s Quaid-I-Azam University. Kaur, meanwhile, is a high-level operative within Pakistan’s Inter-Services Intelligence.

* Rich Sommer (Mad Men) will return to CBS’ Elementary as Harlan Emple, one of Sherlock’s “irregulars,” for a November episode, TVGuide.com reports. Emple — who helped the P.I. solve a mathematician’s murder in Season 2 — resurfaces when he finds a dead body during a math-based puzzle hunt. Elementary Season 3 premieres Thursday, Oct. 30 at 10 pm.

* Showtime’s Ray Donovan is adding companion webisodes, titled “Behind the Fix” and focused on Lena and Avi, following the broadcast of the next three episodes, via SHO.com, YouTube/RayDonovan and other digital platforms.

* Want to smell like Tara Reid during a shark attack? Covered!