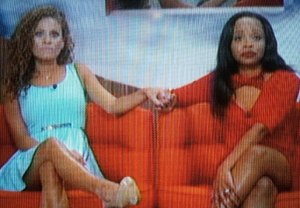 The Big Brother house should have a sign on its front door that reads “No Girls Allowed.”

Of the season’s first four evictions, three of the booted contestants have been ladies (and the only guy to be sent packing has been Devin, Dastardly Tyrant of the Land). And Thursday’s live eviction episode was no different; two women sat side by side once again, one of them much more at risk for leaving than the other.

THE WEEK SO FAR | I know Zach and Frankie have taken to calling their bromance “Zankie” — after all, it rhymes with “hanky” and “panky,” both activities that Zach seems increasingly interested in doing with his best friend/closest ally in the house. But wouldn’t “The Odd Couple” be more appropriate? When the pair became co-Heads of Household following Brittany’s eviction, Frankie remained cool, calm and totally savvy in his gameplay, while Zach went on an utterly heinous power trip. He nominated Christine and Nicole (with the ultimate goal of ousting Amber by week’s end), and insulted the latter during his nomination ceremony. (Not that being called a “Fruit Loop Dingus” by Zach is actually something to be upset over, but your heart has got to be tinier than the Grinch’s to insult sweet Nicole, who doesn’t even know who Hansel and Gretel are! Not cool, Zach Attack.) Fortunately, Christine and Nicole won the Battle of the Block competition, leaving Jocasta and Victoria as the only nominees. Hayden triumphed in the Power of Veto challenge, kept a promise to Victoria that he would remove her from the block and Amber promptly went up in her place. Oh, and Caleb suffered through eating a pickle just to score a backyard date with Amber. (Perhaps the most awkward date in the history of ever? Decide in the comments.)

THE STRATEGY | After Amber becomes the replacement nominee, it becomes less about how the house will vote and more about why Amber’s on the block in the first place. She tracks down Frankie, who mumbles something about Caleb’s passion, and the following he-said-she-said goes down: Amber cries to Christine about how Caleb is messing up her game and quickly becoming her main target; Christine, hoping this will persuade her alliance to keep Amber, runs to The Detonators with the news — aaaaand it totally backfires, giving the men of the house (and Caleb himself) all the more reason to evict the model-turned-esthetician.

THE VOTES | …And evict her they do. All nine voting HGs choose to oust Amber — even Caleb! — and she promptly exits without giving anyone a sugary sweet goodbye hug. And although Team America was given the task of voting against the majority, then publicly accusing two fellow housemates about their votes, Donny and Derrick decide they just can’t go through with it. And who can blame them? Derrick and Donny (and Frankie, though he wasn’t eligible to complete the challenge this week) have all played a smart game thus far. Ruining it for $5,000 couldn’t possibly seem worth it — at least, not when there’s a much bigger prize with two more zeroes waiting at the end of the summer. (Oh, and for the record, Amber claims in her post-eviction interview that Cody is like a brother to her. I think she might be using the Cersei and Jaime Lannister definition of “brother and sister,” no?)

LOSING YOUR MEMORY | In the backyard, the Head of Household competition tests the HGs’ knowledge of short video clips they studied earlier in the week. And apparently, they crammed for this test: Julie runs out of questions to ask, and there’s still five contestants in the game. So…. until next time, it seems? This is the first time that a quiz-themed Head of Household competition hasn’t finished in time — expect the unexpected, indeed.

OK, your turn. Were you happy to see Amber leave the house? Who are you hoping to see become Heads of Household? Can you stand the wait until next week’s live double eviction (!)? Hit the comments!