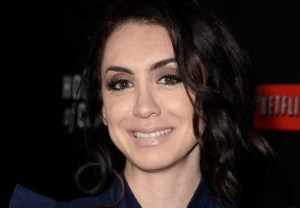 Has The Blacklist‘s Red finally met his match?

Mozhan Marnò (House of Cards) has joined the NBC drama in a series regular role as an antagonist for James Spader’s character, per The Hollywood Reporter.

The actress will play Tamar Katzman, a former Mossad agent and incredibly intuitive spy who goes head-to-head with the crafty puppetmaster.

* Ross McCall (24: Live Another Day) will reprise his role as White Collar con man Matthew Keller during the USA Network drama’s sixth and final season, TVLine has confirmed. The actor tweeted a photo of himself with stars Matt Bomer and Tim DeKay.

* New Girl has her eye on Veep‘s Reid Scott. The actor will appear on the Fox comedy’s season premiere as a wedding guest who incites a competition for his affections between Jess and guest star Jessica Biel, per The Hollywood Reporter.

* Host/entertainment reporter Lauren Sanchez will guest-cohost The View on Wednesday, presumably as a “try out” to join next season’s revamped panel.