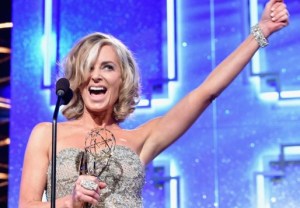 The Days of Our Lives and Young and the Restless vet — who took home the 2014 Daytime Emmy for Outstanding Lead Actress in a Drama Series — is reportedly set to join The Real Housewives of Beverly Hills for Season 5, according to Us magazine.

Davidson, who is set to return to her Days‘ gig on Monday (while still juggling her Y&R role), could be the second soap vet to climb aboard the Bravo reality franchise this week — following news of Lisa Rinna’s casting.

Can you handle some more TV intel? Take a deep breath and keep reading, yo!

* Lost‘s Sonya Walger and Revolution‘s Zak Orth will guest star on Season 3 of Elementary, according to TVGuide.com.

* Orange Is the New Black‘s Pablo Schrieber (aka”Pornstache”) will not be back for Season 3 of the Netflix prison dramedy, the New York Post says, confirming the actor’s previous speculation.