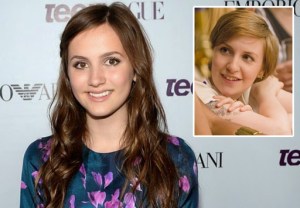 Maude Apatow is about to make her small-screen debut on HBO.

The daughter of Girls executive producer Judd Apatow was spotted goofing around with star Lena Dunham on the show’s New York set last week, and now TVLine has confirmed she’ll be playing a character named Cleo, who could potentially appear in several episodes.

Apatow joins fellow Season 4 guests Zachary Quinto, Gillian Jacobs, Jason Ritter and Natasha Lyonne. Previous credits include roles in her father’s big-screen comedies like This is 40 and Knocked Up.

HBO would only confirm that Apatow will appear in Season 4, which premieres in early 2015.