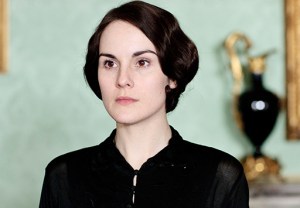 “Things are changing” at Downton Abbey, according to the fifth season’s first promo, a sentiment executive producer Gareth Neame echoes to TVLine.

“In the new season, we have the high-stakes drama, the laugh-out-loud comedy and the romance,” Neame promises. “We have all of the characters doing the things people love to see them doing, but we have a few really nice twists and turns as well.”

Below, Neame teases more of what we can expect in Season 5 — which premieres Jan. 4 on PBS — including the effects of Anna’s rape, Mary’s further romantic struggles and a storyline he calls “Downton at its best.”

TVLINE | One of the biggest twists last season, which many thought to be a major departure from what we’re used to, was Anna’s rape.
Well, I question whether it was a huge departure for what we normally do. Three episodes previous to that, Matthew Crawley was holding his newborn son in his arms, then one minute later was dead on the side of the street. Or when Mary loses her virginity to Mr. Pamuk, and then he croaks. Or when Cora is pregnant and there’s going to be a new heir — until she steps out of the bathtub and slips, then loses the baby. People get relaxed into the gentle aspect of the show and forget that we’ve always had these moments.

TVLINE | Well, it was certainly difficult to watch her go through that. Will she and Bates still be dealing with the aftershocks in Season 5?
I think it would be a bit soft of us to say that [they won’t]. There are certain stories on this kind of show that you pick up for a few episodes, then let fall away. This doesn’t seem like something that could happen to a character and be easily forgotten. TVLINE | Does it involve new characters, or is it more contained within the house?
I can’t answer that specifically, but every episode, we’ll be having some guest; people come in and out. The show is always a melting pot of the regular characters in addition to guests.

TVLINE | Some of those guests being suitors for Lady Mary. What can you say about what she’s going through in Season 5?
When Dan Stevens decided to leave the show — and we tried very hard to keep him — we thought, “Well, OK, let’s get on with it.” That door was closed. And we suddenly thought, “Actually, this is the best thing that could have happened to us.” I’m actually really, really glad it happened. It gave us such a new direction to travel in for the show. Everyone wants Mary to be happy and for her to marry again, but nobody would want that to happen too quickly because they want to respect the memory of Matthew. It’s about timing all those things correctly, and I really like the way we juggled two, maybe even three, suitors in the last season. She’s still not quite sure, and I think there’s a good hook for the audience in the fifth season to see which decision she’s going to make. TVLINE | I’ve got to say, I’m Team Tony.
He certainly seems to have the upper hand, but there are other people who prefer Charles, so we’ll see. … I think it would have been awful if, three episodes after Matthew’s death, she went straight back into the saddle, so to speak. That wouldn’t have landed well for us.

TVLINE | Historically speaking, how will the events of the outside world affect life at Downton this year?
We start off with the first-ever socialist government being elected into power in 1924, which as you can imagine, is like “Goodnight, Vienna” to [the Crawleys]. That first socialist government only lasted for a year, but it was saying that this was the direction of travel, and that the autocracy was not going to last. … We are at the end of an era, but I hope that doesn’t mean that at the end of the last season, the whole place will have burnt to the ground. Part of [the series’ eventual ending] will also be about saying, particularly to the British audience, that those houses still exist. They’re around you, and those people may have lived there 100 years ago, but they’re very like you.

TVLINE | Do you have an end in sight? And regardless of how you get there, do you have an ideal conclusion?
In whatever the storylines end up being, I think people will want some sort of resolution. I’d like there to be some sort of message where you get to the end of it all and you say, “Oh, I see. So Anna Bates is my grandma.” I don’t know how we’ll do this, but I’ve always loved the ending of Schindler’s List when they cut to the piece in color, and they’re all putting the stone on the monument. I loved the way that connected the Second World War, which none of us lived through, to people who were still alive today. I’d love to somehow deliver that message. TVLINE | Lastly, when are Carson and Mrs. Hughes going to get together? And was there always a plan for them?
I don’t know what Julian [Fellowes] would answer to that, but I think it has more to do with the chemistry we saw between Jim Carter and Phyllis Logan. I saw them as sort of a husband and wife very early on. Downton is about romantic love and companionship, and in that sense, they are one of the Downton relationships, even if they’re not married. Obviously that was a lovely tease at the end of last season, so we’ll see what happens to them.

Downton fans, who’s your suitor of choice for Mary? And what else do you hope to see in Season 5? Drop a comment with your thoughts below.