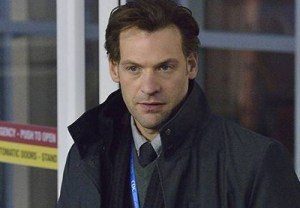 FX’s The Strain is hair-raising — as in it raised questions about star Corey Stoll’s coiffure at a Television Critics Assoc. summer press tour panel on Monday in Beverly Hills.

While viewers are accustomed to seeing the actor sans tresses in projects like House of Cards and Law & Order: LA, Stoll’s Strain alter ego Dr. Ephraim Goodweather sports a wig.

“We have a long way to go, and if you know the [book trilogy which the TV series is based] or you know where it’s heading, we needed the character to have a change of look [in the future],” co-creator and co-author Guillermo del Toro explained. At some point down the line, Dr. Goodweather needs to “able to mix into the normal population without being seen.”

Added executive producer Carlton Cuse: “Our vision of this character has to move from point A to point B, and that was part of the conception of character.”

For his part, Stoll was “skeptical at first” about the look because he thought the producers were “trying to make me fit a mold of a particular kind of hero or TV actor,” he said. “But it was the opposite. It helped increase the eccentricity of the character. It functions as a mask.”

Although Stoll’s physical appearance is directly inspired by the source material, there will be deviations in other areas. With some plot points, “we will get there in a much more baroque way than we would in the book,” del Toro previewed.