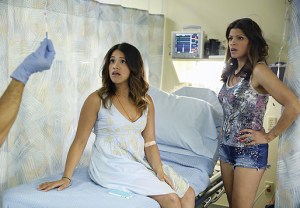 The cast and executive producers of The CW’s Jane the Virgin — described as “Ugly Betty meets Gilmore Girls” — assembled Friday at the Television Critics Association summer press tour to explain their “whimsical” new comedy to the press.

The show’s title, of course, was one of the first things up for discussion.

“We knew it had edge to it,” executive producer Ben Silverman admitted, clarifying that CW President Mark Pedowitz was always a supporter of the title. “But the moment you see the show, you see it’s all about thoughtfulness and morality. It really is a show that, once you watch it, you recognize it’s very deep and broad appeals to all different people going through things in their own life.”

For those worried that Jane and her family will allow the hospital to get off scot-free — Jane is accidentally artificially inseminated in the pilot — fear not. There will be repercussions.

“I find it incredibly difficult to imagine [someone] who gets artificially inseminated who doesn’t sue,” executive producer Jennie Snyder Urman clarified. “We’re going to explore that, [but] Jane is a very good person, and she’ll struggle with that.”

Star Gina Rodriguez said she’s been waiting for the character of Jane to come along for years, wanting to “liberate” young Latina girls and show them they can be more than the media portrays them. She actually passed on a role on Lifetime’s Devious Maids because she found it “limiting.”

“There are other stories that need to be told,” Rodriguez explained. “The media is a venue and an avenue to educate and teach our next generation.” Her assertion that she was thrilled to be playing a character who can be a “size me,” rather than size zero, was met with huge applause.

And despite the show’s English-heavy promos, Jane’s family’s heritage will play a huge role moving forward, especially in the way her grandmother relates to the rest of her family.

“I love that she speaks Spanish in the pilot, and that her daughter and granddaughter talk back to her in English,” Snyder Urman said. “She’s certainly going to speak Spanish in the show.”