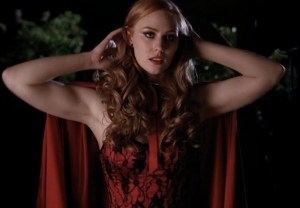 Deborah Ann Woll has lined up her first major post-True Blood gig — and it’s a Marvelous one.

The actress has been cast as Karen Page in Marvel’s upcoming Daredevil series that will premiere in 2015 on Netflix, according to EW.com. Her character originated in the episode 1 of the Stan Lee comic book on which the TV series will be based — serving as a secretary and love interest for both Matt Murdock (the titular hero’s alter-ego) and his partner Foggy Nelson.

Woll joined True Blood during Season 1; the series is midway through airing its seventh and final season on HBO.

Boardwalk Empire‘s Charlie Cox landed the role of Daredevil back in May, while Elden Henson will play Foggy.

Stoked that Woll’s hiatus from the small screen won’t be a long one? Daredevil fans, can you picture her as Karen Page? Sound off below!