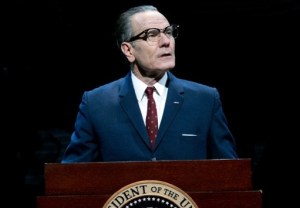 An Emmy winner, a Tony winner and an Oscar winner walk into… HBO?

Yes indeed, the pay cabler has scored the rights to Broadway smash All the Way — which won 2014 Tony Awards for Best Play and Best Actor in a Play — with Bryan Cranston set to reprise his role as President Lyndon Johnson and Steven Spielberg‘s Amblin Entertainment among the producers, according to Deadline.

The adaptation’s pedigree is, to put it conservatively, rather eye-popping.

Spielberg, a four-time Emmy winner (most recently as producer of 2010’s outstanding miniseries The Pacific) and an Acaedmy Award winner as director of Schindler’s List, acquired the rights to All the Way last month. In addition to his Tony this year, Cranston will, of course, attempt to win his fifth Emmy award as Best Actor in a Drama Series for Breaking Bad next month.

To add to the project’s cachet, playwright Robert Schenkkan (who’s also got a Pulitzer Prize on his resume, for 1992’s The Kentucky Cycle) will adapt his own script for the small screen.

All the Way takes place in 1964 — during LBJ’s first year in office following the assassination of President Kennedy — as America grapples with its involvement in the Vietnam War and a landmark civil rights bill is passed. J. Edgar Hoover, Martin Luther King, Jr., and Governor George Wallace are just a few of the historical figures represented in the stage version.

Stoked about seeing All the Way on HBO? Any bets on how many Emmy nominations it’ll eventually nab? Sound off below!