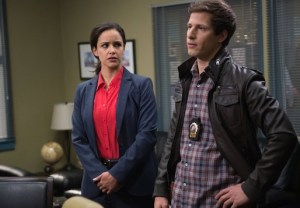 The stars and executive producers of Fox’s Brooklyn Nine-Nine assembled on set Wednesday to give reporters a (safely guarded) peek at what Season 2 — premiering Sept. 28 at 8:30/7:30c — holds for Jake, Captain Holt and the rest of the precinct.

You have the right to remain spoiled:

* For starters, “There is a time jump,” executive producer Mike Schur confirmed. “It does not pick up right where we left off.”

* Jake and Amy’s still-budding romance is “not going to be the main focus of the show,” Schur said. “It’s going to be one of the elements of the show we’re going to follow as the year goes on.”

* Schur was hesitant to say too much about how it all goes down, but he did confirm that Charles and Gina’s finale encounter will “play into the premiere and the early part of the season.”

* Schur said it’s “always a possibility” that fan-favorite guest-stars like Patton Oswalt and Craig Robinson will be seen again in Season 2, as they’re forever “in the world of the show.”

Niners, what are your hopes for Season 2? Drop a comment with your thoughts below.