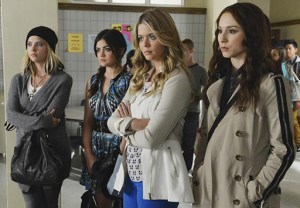 That must have been some nap.

In this week’s Pretty Little Liars, A is awake and off with a bang (literally). And if blowing up Toby’s house isn’t enough (RIP Chez Cavanaugh), he/she/they felt it necessary to film Alison’s mother’s burial and offer her and the girls front seats to the horror.

Unbelievably, that’s not all A accomplished this week. Read on to see what everyone’s favorite black-hoodie-leather-gloved fiend got up to.

THE ANTI A-TEAM | The Liars reconvene to discuss the possibility of Shana not being A (“Either Shana can cause explosions from the grave, or A is back.”), but no one wants to accept that — least of all Alison. But texts don’t lie, and for all  intents and purposes, it looks like that might be the case. Scared for her life, Ali decides to ignore her friends’ wishes and leave town and head for Princeton, where Noel will be waiting to pick her up. Hanna eventually agrees to help her, going as far as loaning her a wad of cash and the clothes off her closet rack. (Perhaps too eagerly.) Alison returns home to say goodbye to her dad, but finds it dark and empty (because let’s face it none of their parents are ever home), so she turns on a lamp. Later, as she’s leaving, she notices that it’s been switched off… and that’s A’s cue to knock her down and begin strangling her with her yellow scarf. (A warning against pointless accessories if I ever saw one.) Luckily, Emily arrives just in time to fight off the attacker. Shaken by the attack, and touched by Emily’s concern, Alison asks if she can stay in Emily’s room, to which Emily agrees, tucking her in for the night.

RESEARCHING FOR ANSWERS | Ezra is hot… on the trail of a connection between Mrs. D and Bethany, with Aria doing her best to help him out. Though when he attempts to get back together with her, she tells him their little relapse was a mistake (even though their love is a drug she just can’t quit). But before Ezra can convince her otherwise, a knock on the door reveals Lieutenant Tanner, who is bringing her interrogation A game (pun intended). Later, Ezra and Aria open the folder she found outside his apartment, they find one of Bethany’s drawing’s inside, the subject of which appears to be Mrs. D. A quick check of Ezra’s security cameras reveals that the mystery messenger was Eddie Lamb, a nurse currently working at Radley, whom Spencer had questioned earlier to no avail. This inspires Aria to go undercover as a volunteer at the sanitarium.

FAMILY MATTERS | Spencer tries to get her parents to reconcile, but their little coffee date doesn’t go according to plan: Her father agrees to move out. Spencer begs her mom to give dad another chance, but her mother says she already has. (Side note: For a guy who’s house just burned down, Toby is getting A LOT done.)

CALEB MAYBE | Speaking of too many chances, Travis breaks up with Hanna after he sees Caleb in town and deduces that her ex might be the reason she’s been blowing him off. He’s not completely wrong. Instead of meeting Travis for a date, Hanna goes over to Caleb’s, where they share a drink. (And everything feels right in the universe.)

Now it’s your turn. What will Aria uncover at Radley? Where have all the parents gone? Why is Spencer dressing like a barista-in-training? Drop your theories in the comments section below.