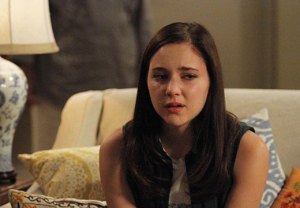 Now that April’s secret is out on Chasing Life (ABC Family, 9/8c), will little-sister Brenna finally shed her troublemaking ways to keep their family from falling apart?

Below, Brenna’s portrayer Haley Ramm previews what’s to come in the second half of Chasing Life‘s first season, including more sisterly bonding,  Brenna’s romantic dilemma and which guy she would pick for her TV sis.

TVLINE | Last episode we saw Brenna processing what April’s diagnosis means. Will we see more of that in the upcoming episodes?
Definitely. You’ll actually see Brenna step up even more. It’s been fun going from her being completely irresponsible and a mess [to] now [where] she starts to surprise her family because she’s taking action, helping out and doing things. You see that even more in the second [half of this season]. She’s still growing towards that.

TVLINE | Is she done acting out, or will we see glimpses of the old Brenna?
She’ll act out a little bit. She’s still 16 and doesn’t have it figured out… In the next [few] episodes she’s constantly put in this position where she has to make decisions and she’s figuring out who she wants to be involved with in her life — whether it’s relationship or friendship. She’s still trying to figure out just how everyone wants to be a part of her life.

TVLINE | For a while there, she was one of the few people who knew about April’s cancer. Will they grow closer now?
They do get closer. Their chemistry is really cool… They start to be able to be able to talk about anything.

TVLINE | We got a glimpse of April’s relationship with their dad. Will we get a chance to see Brenna’s as well?
I wish. It would have been really cool because I’m such a My So Called Life fan. … I was fangirling when he was on set, but no, you don’t really see too much of their relationship. [Though] that one flashback that we had in [this] past episode you definitely see how quickly Brenna has changed. She went from being so sweet and innocent, to growing up so fast and turning into this jaded person. It had a lot to do with her dad’s death.

TVLINE | Brenna and Beth hanging out this last episode was a lot of fun. Are we going to see more of that as the season unfolds?
Some of my favorite scenes are with Aisha [Dee] who plays Beth. We’re close in real life. We’re always hanging out together and traveling together. I love when they put a scene with Brenna and Beth together, it’s always real fun and I like the way that their characters interact. Beth is like Brenna’s other older sister but only kind of cooler because it’s not actually her older sister, it’s her older sister’s friend. She can tell her more. That was one of my favorite scenes this whole season.

TVLINE | Kieran didn’t have the best reaction to Brenna’s revelation about April’s cancer. Are they going to talk about that?
[Kieran]’s an a–hole about it, which is why [Brenna] reaches out for Greer – something about talking to a girl. Sometimes it’s different because they get the emotion part of it more. That’s why she gravitated towards Greer more. Kieran [is] in a position where we’re not that close yet since they just started [dating], so it is awkward for me to just come to him with this emotional thing. You can’t blame him. But at the same time, he could have been a little more compassionate.

TVLINE | Beth brought up the fact that Brenna has a love triangle of her own. Could you tease where that might be headed?
[Brenna] goes back and forth with both [of them]… She’s going to have to have to make a lot of decisions in the next few episodes.

TVLINE | If you had to choose for April, which would you pick: Leo or Dominic?
That’s hard… I would pick Leo just because his personality is really funny and he’s always teasing. There’s something about that that girls like. His character is so confident. I think I like Leo better but I don’t know… Dominic is so sweet and he’s the first guy, so you always kind of root for the guy who’s there first.