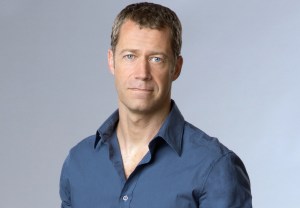 Mystic Falls’ finest will be facing yet another new threat when Season 6 premieres in October — and this one’s homegrown.

Colin Ferguon (Eureka, Haven) has been cast in the role of Tripp, TVLine has confirmed, the head of a community militia who will “do anything to protect his town.” He’ll make his first appearance in The Vampire Diaries‘ sixth season premiere.

Executive producer Julie Plec took to Twitter on Monday to reveal which character will be butting heads with Tripp the most:

Of course, Tripp won’t be the only new character causing grief for our heroes. Actress Gabrielle Walsh has been cast in the “shady” role of Sarah, who will make her debut on the show’s sixth season premiere.