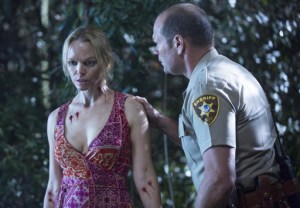 With people dying left and right (and occasionally naked) on True Blood‘s final season, it’s becoming harder to predict just how it’ll all end — and Lauren Bowles is relishing every minute of her front-row seat to Bon Temps’ demise.

Speaking with TVLine below, Bowles reflects on Holly’s three-week stint at Fangtasia, then does her best to tease the rest of Season 7, including my personal favorite question: Will someone say “I do” before the series ends? Plus, she discusses the possibility of a True Blood movie — and considering there’s a musical in the works, does a leap to the big screen really sound so crazy?

TVLINE | Congratulations on being the first character to escape the basement.
Thank you! I got out by the skin of my neck.

TVLINE | I was starting to think you were going to spend the entire season down there.
Believe me, so did I after we got those first couple scripts. I thought, “Oh my God, I’m going to spend all season in the saw room.” TVLINE | How was it hanging out with Carrie Preston and Jurnee Smollett? You guys must have bonded.
Other than your ass getting awful sore from sitting on that floor for so long, we had so much fun. Our first day of filming — with the wonderful Mr. Moyer as our director, by the way — was in that saw room. Carrie and I started laughing because, literally, our first take of the season was just us screaming our little heads off. She turned to me and said, “Season 7, just start screamin’,” so we decided that should be the tagline for the final season.

TVLINE | These sorts of near-death experiences often inspire bold follow-up decisions. Might this all affect her future with Andy?
Well, just maybe. I do think that when you have this kind of life-or-death experience, it makes you want to live your life a little fuller, so perhaps that will be introduced into Holly’s personal life.

TVLINE | Well, we do know Andy is going to make a “life-changing decision.” Could that involve a ring?
[Laughs] You know what, I think it really affected all of those guys. If you remember that other town that was wiped out, it was full of the same kind of people living in Bon Temps. They were eating their frozen pizza dinners, and the next thing they knew, they were dead. Everyone’s having these philosophical moments with themselves, asking, “Am I living my life to the fullest?”

TVLINE | Not to the same extent, but with the show ending, I assume you’re feeling similar emotions.
Completely. I just dropped my daughter off at kindergarden camp, and she was nine months old when I got cast on the show. I’m feeling very full all around, but it’s also exciting to see what might be coming next. … It’s every emotion under the sun. TVLINE | We’ve already had some surprises this season — Tara and Alcide’s deaths, for example — but are there still bigger surprises to come?
There are a couple coming up this Sunday, actually; it’s a huge action episode that ties some things up, but this being True Blood, more stuff starts to unravel. And from there, we just go out with a bang.

TVLINE | Does the series’ ending feel final, or does it sort of leave us with possibilities?
That’s a good question, and you know what? It’s kind of both. Certain things are wrapped up — like, the final nail is put on the coffin — and for others, you see how certain people’s lives could continue. I keep joking with our showrunner [Brian Buckner] about doing a True Blood movie, and he just looks at me like he wants to kill me. And I just say, “Come on, all the HBO shows are doing it!”

Truebies, hopes for the rest of Season 7? Drop ’em in the comments section below.