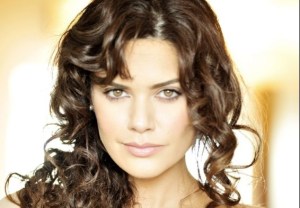 Telemundo star Angelica Celaya, whose stateside credits include Dallas and Burn Notice, has been cast in the upcoming drama as Zed, it was announced Sunday at the Television Critics Assoc. summer press tour in Beverly Hills.

A character from the original Hellblazer comic book series, Zed is a psychic who already has powers when she encounter Constantine (played by Matt Ryan) in the TV series. “She’s someone who can go toe-to-toe with John,” executive producer Daniel Cerone said. “She’s intuitive. She can detect bulls–t,” whereas Lucy Griffiths’ exiting alter ego Liv — one of the writers’ own inventions — was “very wide-eyed [and] reactive.”

Although Liv still appears in the pilot, Goyer said that one scene from the episode will be reshot — and in sharing that, he perhaps let slip a bit of a spoiler when describing how Liv’s absence will be addressed going forward.

“[John’s] friends drop like flies,” Goyer said. “He is this classic noir character who often ends up alone, and we thought it was kind of consistent with the character.”