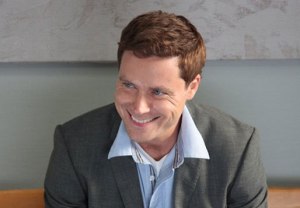 When Greg Poehler’s older sister Amy won her first Golden Globe for Parks and Recreation last January, he wasn’t awake to see it. He was nearly 5,000 miles away in Sweden, sleeping through an awards show he’d made a point to watch for years.

Poehler has been adjusting to those highs and lows of life in Sweden since moving there eight years ago, and his TV alter ego Bruce is now doing the same on NBC’s new comedy Welcome to Sweden (premiering tonight at 9/8c). Based on Poehler’s own life, the show follows celebrity accountant Bruce as he relocates overseas for wife Emma (Swedish actress Josephine Bornebusch) and puts up with her eccentric family and extreme culture shock.

Although Poehler’s real in-laws couldn’t be further from the wacky, judgmental pair that Bruce encounters on the show, Poehler’s first day in Sweden really was strange enough to warrant a writing session. “I was in an attic in Stockholm on a snowy day two and a half years ago, typing on an old Dell computer, wondering if anyone would ever read the script,” Poehler says. “I wanted it to be real and sweet and funny, in that order.” Of course, it’s not just Bruce who experiences a clash of cultures on Sweden. Poehler — who, as a former intellectual property lawyer, is still relatively new to show biz — dealt with similar frustrations as he produced the show for both American and Swedish audiences. (The show has been highly successful overseas and has already been renewed for Season 2; what airs on NBC is a slightly re-edited version) To that end, Poehler shied away from material that was “too stereotypical” of either nation. “When we had the discussion of what my character should be like, they said, ‘Can’t Bruce just love guns? Can’t that be one of his things, that he’s just a super gun-lover and very religious?’ As an American, I recoil a bit when I hear that.”

That’s not to say Sweden doesn’t take risks. Viewers of the sitcom will encounter a few elements that seem better suited to American reality shows — for example, bleeped F-bombs and blurred body parts. Poehler admits there’s lots of “unnecessary nudity and bad language” in the Swedish version, and he wants to stay as true to his original vision as possible without sacrificing good taste. “There’s very little that’s different between the two versions, which is pretty great,” Poehler says. “It really speaks to trying to find one version that worked in both places.”

For American viewers worrying they won’t connect with Sweden, fear not: The 10-episode freshman season features an impressive roster of guest stars, including Will Ferrell, Aubrey Plaza, Gene Simmons and, of course, Poehler’s big sis Amy, who appears in the pilot as one of Bruce’s self-obsessed celebrity clients (in addition to co-executive-producing the series).

Will you take a trip to Sweden when the show debuts? Drop a comment with your early thoughts below.