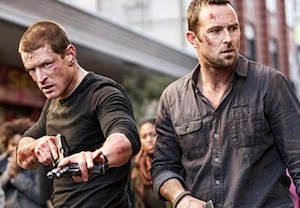 Typically the high-octane action-drama fires off its new episodes in August, but production on Season 4 was paused for six months when series star Sullivan Stapleton, who plays Sgt. Damien Scott, sustained a serious, injury off-set in February.

Stapleton needed the time to recuperate and return to the peak physical condition needed for the action- and stunt-heavy drama.

“Production … will be on hiatus to allow him time to recover,” the cabler said at the time in a statement. “We plan on resuming production in the fall.

In other news, Cinemax has renewed its upcoming period drama The Knick for Season 2, ahead of its Aug. 8 debut.

Set in downtown New York circa 1900, The Knick is centered on the Knickerbocker Hospital and the surgeons, nurses and staff who work there, pushing the bounds of medicine in a time of astonishingly high mortality rates and zero antibiotics. Academy Award and Emmy-winning director Steven Soderbergh helmed all 10 episodes of the first season.

Clive Owen headlines the series as Dr. John Thackery, a brilliant surgeon pioneering new methods in the field — despite his secret addiction to cocaine.