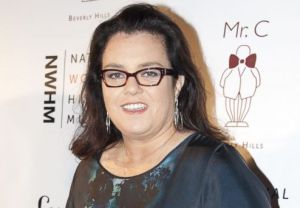 Somebody give Elisabeth Hasselbeck a hug. Or a tranquilizer.

ABC confirmed via Twitter today that Rosie O’Donnell is returning as a co-host on The View for Season 18, joining moderator Whoopi Goldberg, as the daytime talker undergoes a summer facelift.

ABC’s confirmation of O’Donnell’s return comes less than two weeks after word broke that both Sherri Shepherd and Jenny McCarthy will be parting ways with the chatfest — news that each of the ladies confirmed on Monday’s telecast.

O’Donnell previously cohosted The View during its 2006-07 cycle. In 2011, she launched The Rosie Show on Orpah Winfrey’s OWN network, but it lasted less than a year.

On two occasions in 2014, O’Donnell returned to The View, first in February and more recently as part of a “reunion” of all the show’s hosts, as tribute to boss and departing panelist Barbara Walters.

Excited that O’Donnell will officiall return to the show? Or would you have preferred someone new? Sound off below!