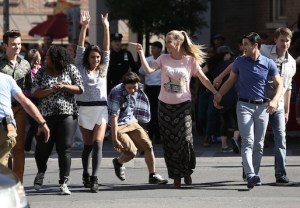 After months of deliberations with series cocreator Ryan Murphy and 20th TV, the network has decided that the show’s sixth and final season will consist of 13 (uninterrupted) episodes, TVLine has learned.

Back in May, then-Fox president Kevin Reilly hinted that Glee‘s farewell season, originally slated to be 22 episodes, would likely be trimmed. “We’re going to sit down and talk [to exec producer Ryan Murphy] about how to end the show and how many that is,” he said at the time.

Murphy, meanwhile, recently told TVLine that the series is “getting back to its roots” in Season 6. “I’m sort of reinvigorated about it,” he enthused. “It’s getting back to what I was initially interested in with the show, which was arts in school. The last season is really about the importance of arts education in our high schools… I think people will like it.”

Glee is set to return at midseason.