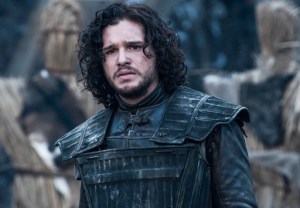 HBO execs are not losing any sleep over the next Game of Thrones book – or the lack thereof, to be precise.

“We’re not concerned about it,” HBO Programming chief Michael Lombardo admitted at the Television Critics Assoc. summer press tour in Beverly Hills on Thursday, in response to worries that the TV series may outpace author George R.R. Martin’s ability to finish the next novel.

“We’re not off on our own,” he noted. “George is an integral part of the creative team [and] every move is being choreographed very closely with him. We’ll have to figure it out with George. We’re in conversations with him.”

As for Martin’s desire to cap the series with a film, Lombardo shut down the idea – for now – admitting there have been “no conversations” about sewing things up on the big screen.

“[Martin] is 100-percent focused on his books and the series” right now, HBO Chairman & CEO Richard Plepler said. And that’s a good thing, since the pay cabler’s execs are “not talking about ending the show in the next two years,” Lombardo added.

Other tidbits from the exec session:

* Lombardo was mum on the cast make-up of True Detective Season 2, save for hinting that “some announcements will be happening in the next week.” “We’re going to do the next season with puppets,” he joked, adding, “[T]he two scripts we have are…more exciting than the first season.”

* Don’t count out another edition of Curb Your Enthusiasm. Lombardo recalled a recent run-in with series creator Larry David: “I said, ‘So Larry, should I emotionally get Curb out of my head?’ He says, ‘No, no, no.’ As long as he’s still thinking about it, we have a place for him.”