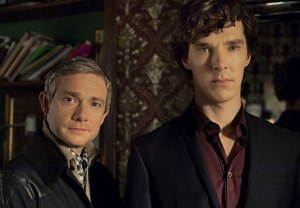 Sherlock will be back on the case for Season 4, it was officially announced on Wednesday. But wait, there’s even more good news.

Preceding the mystery drama’s new three-episode run on PBS, fans will get a special as well.

RELATED Sherlock Season 3 Finale Recap: Shot Near the Heart, and You’re to Blame

“A special, plus a new series of three episodes — it’s a record-breaking run!” Sherlock co-creator Steven Moffat enthused in a statement. “Of course, it’s far too early to say what’s coming, but we’re reasonably confident that the very next thing to happen to Sherlock and John is the very last thing you’d expect.”

What last we tuned in, Sherlock had come out of a brief exile to face one of his biggest mysteries yet: Why is Moriarty’s face being broadcast on every television in the land?

Shooting on the special will begin in January 2015 — to possibly not air until Christmastime, Martin Freeman has hinted — with production on Season 4 set for later next year.

“It’s taken a little while to get the dates sorted as none of the boys are exactly sitting back twiddling their thumbs,” quips Sue Vertue, executive producer at Hartswood Films, “but there was unanimous goodwill to make this work so we’re thrilled that 221b is going to be inhabited again.”