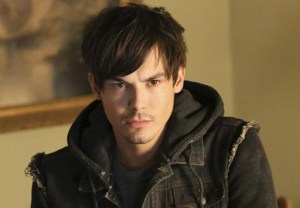 The Cat in the Hat is back! Hanna’s ex returns to Rosewood on Tuesday’s 100th episode of Pretty Little Liars (ABC Family, 8/7c), but Tyler Blackburn tells TVLine we should prepare ourselves for a whole new Caleb.

“His time in Ravenswood has messed with him greatly,” Blackburn explains. “He’s questioning his sanity, what life is, what’s real and what’s not. So he comes back to this hyperreality in Rosewood, and he’s just overwhelmed. He’s angry, he’s confused, he’s sad, he’s mad — all these things. He has a dark side now that he really didn’t have before.”

Below, Blackburn delves deeper in Caleb’s changes and previews his unexpected reunion with one Hanna Marin.

TVLINE | I have to say, I was worried that Ravenswood would be swept under the rug, but it sounds like you’re addressing it head-on.
We had the same writers and producers on Ravenswood that we do on Pretty Little Liars, so even though we didn’t get picked up, they’re still very invested. It’s important to all of us that we wrap up what was going on in Ravenswood. TVLINE | Caleb will also be meeting Alison for the first time. Does he have a unique perspective on her since he didn’t know her before she disappeared?
Exactly. He really only knows what he’s been told by Hanna, which is that she’s a very evil person. That’s where his head is at with her … and Caleb isn’t easily manipulated. He’s got those street smarts, you know what I’m saying? [Editor’s note: Expect Ali and Caleb to really butt heads on the July 22 episode.]

TVLINE | Did you keep up with Pretty Little Liars while you were away?
To be very honest, no, but only because I was so busy while filming Ravenswood. I feel like it kind of works out, though, because Caleb also didn’t know what was going on in Rosewood while he was gone. TVLINE | I only asked because I want your thoughts on Travis. Will Hanna have to choose between you two? Seems like a no-brainer to me.
I know that when Caleb first comes back, he sees that Hanna’s trying to be happy with Travis. He wants her to be happy, so he lets that happen. I think Hanna will always be in love with Caleb, but things might not happen exactly the way the audience wants. We don’t see each other, then immediately run to each other and start kissing.

TVLINE | OK, let’s talk about your new hair. Why did you decide to cut it after all this time?
There were personal reasons for it, but also reasons for Caleb. I’ve had long hair for so long. Before I did the show, my hair was down to my nips, it was so long. Then it started getting shorter and shorter, and I really needed a change. I also thought, “What if this could visually symbolize what Caleb has been through?” I feel like he’s uncomfortable in his own skin after what happened in Ravenswood.

TVLINE | Caleb’s return is only one aspect of the 100th episode. What else can we look forward to?
This whole season, the main theme is that Alison is back, and there some advancements on that front. What’s interesting is that everyone has a different reaction. And Mona, being the psychotic person that she is, kind of brings her old “A” game back.

PLL fans, are you pumped for a full-on Haleb reunion this Tuesday? Drop a comment with your thoughts, hopes and fears about the 100th episode below. 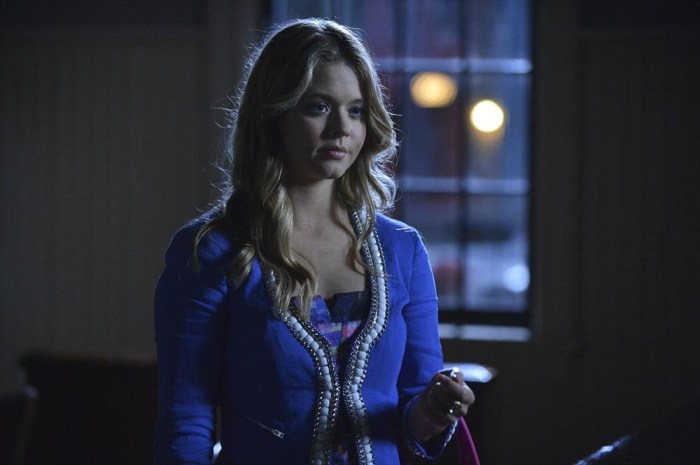