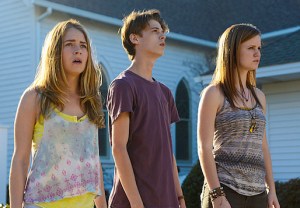 I’ve been hesitant to write about Under the Dome Season 2 in large part because its freshman run robbed my life of more hours that I would have liked.

Because although some peers seem to be reflecting on the series with an “Emperor’s new clothes” appreciation, I remember starting one recap with the line, “Well, that was a whole lotta silly.” I believe I am not alone when I say that I felt like we and the people of Chester’s Mill were trapped inside that dome with dwindling foodstuffs but, worse, few compelling storylines. (This is where I note that nearly half of TVLine readers polled gave the season finale a grade of D or F.)

Dare I say, one of Season 1’s more clever moments was my titling a recap “Labor Day Barbie Qs.”

The show started off well enough, mind you — I can’t take that away from it. And lord/monarch knows, viewers turned up for this event/limited/unlimited series. But as we brace for Season 2 (premiering tonight at 10/9c, on CBS), here are my hopes for what’s ahead.

TRY TO REMEMBER…. | Continuity during Season 1 was in as short supply as potable water. For example, there was the MOAB that laid waste to the land outside the dome, yet afterward we pretty much always saw an untouched countryside through the transparent barrier. Or, remember when Norrie’s widowed mother vanished for multiple episodes with little explanation? And then there were the willy-nilly relationships, where one week Big Jim and Junior were mortal enemies, and the next a warmly bonding father/son. (And then… adversaries again.) And let us not forget how quickly Angie forgave Junior for keeping her prisoner, shackled, in a bomb shelter. Because he’s misunderstood. Heck, the townsfolk couldn’t even agree on one pronunciation of “propane.”

TRUTH IN CONSEQUENCES | As I oft mused during Season 1, why were the kids the only ones trying to crack the mystery of the Dome? Because make no mistake, if a mysterious supernatural barrier traps me in my small town, I’m hungry for answers, no matter what demo I fall into. Why was the fleeting water crisis (which was only introduced to set up Big Jim as a villain) nearly the only acknowledgement that resources were growing precious in Chester’s Mill? Why was everyone freely driving around in their cars as if they had happened to buy a full tank from the one, mayyyybe two filling stations a tiny burg like this might have, just before the Dome arrived?

THE FRIGHT STUFF | Under the Dome famously is based on the Stephen King novel, and King himself penned (and cameoes in) the Season 2 premiere — so it’s got that going for it. And yet so much of Season 1 was simply not scary, nor suspenseful, nor even unsettling. What could have been at least an episodes-long exploration of how people cope whilst cooped up inside a mysterious dome, their access to world cut off, instead spent only a bit of time on the “Everyone becomes looters!” notion before asking us to “fear” who might die next because they got in the way of Natalie Zea’s drug-dealing business…?! (And now, based on Season 2 promos, we are to “fear” flying charcoal grills?)

DON’T BORE US | We who consume TV love the idea of the networks giving summer programming a swift kick in the pants. But I challenge anyone wearing dome-colored glasses to claim it was one-quarter as compelling as the “event series” revival of 24. Through Dome‘s first 13 episodes, any “answers” have come in the form of coded riddles (Monarchs! Pink stars! Green clovers!) delivered by, apparently, aliens — which as a result sounded like so much We Got an Unexpected Season 2 wheel-spinning. We want to love summer TV because it’s good, not just because it’s new.

What are your hopes, wishes and dreams for Under the Dome Season 2?