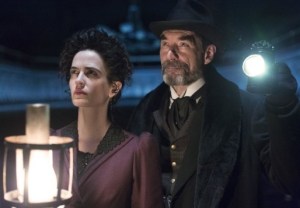 Over and over again in its first season, Showtime’s gorgeous and ghastly Penny Dreadful has shocked us. With the murders of Proteus and Van Helsing. With Ethan and Dorian’s absinthe-drenched hook-up. With performances by Eva Green as Vanessa that are so preternatural, she risks being accused of sorcery. Yet the series still managed to save a few surprises for the finale. So read on, why don’t you, and savor once again the thrills, chills and battles of wills that ran through “Grand Guignol” like so much blood through a vein.

BREAKING UP IS HARD TO DO | Not once but twice in the hour Vanessa gives persistent Dorian the brushoff. The second time, she explains that, in spite of the rarity of their connection, she dare not pursue it. It’s “too dangerous,” she says, for it releases something within her that is “unhealthy.” (Considering that that something is a demon, that’s putting it rather mildly!) When he appears to not quite understand what’s happening, much less how he feels about, she kisses him (goodbye) and explains, “It’s rejection.” After she leaves him, he’s further taken aback to discover that he’s shed a tear.

LIFE AFTER LOVE | Encouraged once too often by Maud, Caliban uses stage makeup to try to compensate for his deathly pallor – with disastrous results. When she laughs at him, he forcefully steals a kiss, and before you know it, there’s screaming, choking, and Frankenstein’s monster is out of both a job and a home. Since he has nowhere else to go, he shows up at Victor’s laboratory. And, instead of lash out or even object when his maker points a gun at his head, the heartbroken monster asks him to pull the trigger. “I would rather be the corpse that I was,” he says, “than the man that I am.” Finally feeling empathy for his creation, Victor hastens Brona’s demise and sets about resurrecting her to grant Caliban’s wish for an immortal mate.

AN AMERICAN WEREWOLF IN LONDON | As if Ethan didn’t have enough to contend with, what with Brona’s passing, he’s also being tracked by bounty hunters sent by his father. The first time they attempt to apprehend him, they just get lightly pummeled. But the second time? Oh dear. As they threaten to drag him away like a monkey, he transforms into a werewolf, and… well, judging from the amount of blood that’s spilled, it doesn’t end well for Ethan’s pursuers.

UTTER DRAC | Early on, Sir Malcolm admits to Vanessa not only that he’s willing to sacrifice her for Mina’s sake but that he might be hoping that it comes to that. Not exactly what you want to hear as you’re about to storm the Grand Guignol in search of vampires, but hey, at least now Vanessa knows where she stands. As expected, the theatre is full of blood-suckers. And, though for a moment it looks grim (especially for Ethan – good thing these beasties seem disinterested in actually biting anyone), Sir Malcolm impales the leader of the pack just in time to save the day. Er, night. That’s when things get really interesting. Mina emerges, safe and sound, and joyfully embraces Vanessa. Then her eyes go dark, and she’s revealed to still be a vampire. “You brought her to me,” she tells Sir Malcolm. “You’ve done well.” However, just as she’s about to sink her fangs into her ex-BFF, Sir Malcolm shoots her. “I’m your daughter,” she protests. “I already have a daughter,” he retorts. Clearly, Sir Malcolm and Vanessa’s relationship will never be the same. (Later, they even share a tearful embrace.) So all’s well that ends well for them, then? Well, not quite. Concerned about the possibility of being, um, repossessed, Vanessa goes to church to inquire about getting herself an exorcism. And, while the priest seems pretty willing to consider her request, he also points out that being touched by the devil makes her, in a backhanded way, sacred. Does she want to give that up? Or, as he puts it, “Do you really want to be normal?” Before Vanessa can answer, that’s it. The episode and the season are over!

Okay, your turn. What did you think of the episode? The season? Were you surprised to find out that Ethan is a werewolf? Were you disappointed that we never got a look at Dorian’s portrait? Are you glad that it seems like Brona will (kinda) live on? Hit the comments!