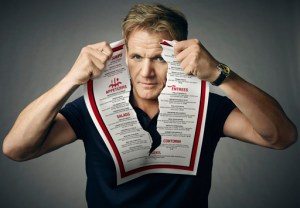 Ladies and gentlemen, Gordon Ramsay has left the kitchen.

The TV host on Monday announced that he’s decided to stop making new episodes of his reality series Kitchen Nightmares, which has become an international hit since debuting in the UK in 2004.

After airing for five seasons in the UK, an American version of Nightmares was brought to Fox in 2007.

“I’m currently filming 4 new episodes, Costa Del Nightmares, for [the UK’s] Channel 4, which will be my last,” reads a letter posted to Ramsay’s official website. “I’ve had a phenomenal 10 years making 123 episodes, 12 seasons, shot across 2 continents, watched by tens of millions of people and sold to over 150 countries. It’s been a blast but it’s time to call it a day.”

Adds Ramsay, “During this time, I’ve visited over 100 restaurants, meeting and trying to help or in some cases failing to help, some of the most weird and wonderful people. Of course Amy’s Baking Company is a standout along with Bonaparte’s but there were good times too; the lovely sisters at La Galleria and Momma Cherri’s to name but two.”

Ramsay concludes his letter by assuring fans that his other two series — Hell’s Kitchen and Master Chef — aren’t going anywhere.

“It’s been memorable!” he writes. “Thank you for watching.”

Are you bummed about the sudden death of Kitchen Nightmares? Drop a comment with your thoughts below.