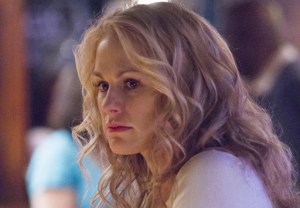 Bon Temps has always been a crappy place to live — impeccable public school system aside — but after Sunday’s True Blood season premiere, you’d have to pay me to take up residence in that god-forsaken death trap.

The Hep-V vampires we met last season have graduated from “casual nuisance” to “nationwide epidemic,” and no one — be they human, vampire, werewolf, fairy or mermaid — is safe. In fact, one of the show’s longest-lasting characters lost her life to the brainless hoard within the first five minutes of tonight’s premiere.

ANOTHER ONE BITES THE DUST (AGAIN) | I’m referring to Tara, of course, who suffered the most tragic death a character possibly can: an off-screen one. Sookie’s BFF’s big farewell simply consisted of Lettie Mae screaming — there’s going to be a lot of that this season, so get used to her piercing vocals now — while covered in her daughter’s goopy remains. But here’s a question for the group: Is Tara really gone? “Death” has always been a relative term on True Blood, and with T’s manic mama screaming about having visions of her around the house, I think it’s safe to say we haven’t seen the last of Tara. (Now, let’s just hope she comes back with a muzzle for Lettie Mae, because OH MY GOD THAT VOICE.)

SOOKIE TO THE RESCUE | Don’t worry, even in the midst of the town’s apocalyptic downfall, Sookie and Alcide still found time to bicker like an old married couple. At least we got a nice little make-up sex scene out of it — which was directed by Stephen Moyer, no less. (So awkward.) And you couldn’t help but feel for Sookie in that final scene, when she begged the  people of Bon Temps to let her help them. (“Even though most of you hate me, I love just about everybody here.”) It was a nice reminder that, deep down, Sookie really is just a simple small-town girl who wants to make things right. Also, she’s literally a fairy princess.

RIDING WITH BOYS ON CARS | Speaking of Stackhouses getting down and dirty, Jason also had some fun with his vampire protector, Violet. It may have been angry, violent fun — but it was fun, nonetheless. I’m not exactly sure how I’m supposed to feel about that relationship, but if it mostly consists of them boning on the hood of Jason’s cop car, count me in. Count me in forever.

VIKING HUNTER | Where in the world is Pamela Swynford De Beaufort? This week, Morrocco, where she played a surprisingly funny game of Vampire Russian Roulette as part of her plan to track down Eric — and to remind everyone what a badass she is. Seriously, when she said, “Your god and my god can go to a motel and have a circle jerk for all I care; I’ll be in hell, having a three-way with the devil,” I nearly peed myself. (OK, more than nearly.) Though I’m bummed we still have to wait for her to find Eric, at least we got to see Pam at her darkest this week. That’s always fun.

* Your thoughts on Nathan Parsons as the new James? Recasting can be rough, and I really liked Luke Grimes, but I think Parsons fits in beautifully. It’s about time Lafayette got himself a “friend.”

* Vince — Who? Sorry, I don’t really know — caught Sam shifting back into a human after the vampire attack. Will the shifters be the next come out of the proverbial closet?

* Holly and Arlene screaming was all well and good, but am I the only one who wished the iconic Ginger was down in that dungeon with them? I miss them golden pipes.

Truebies, did the Season 7 premiere meet your expectations? Were you sad/surprised by Tara’s death? And where do you hope things will go from here? Drop a comment with your review of the episode below.