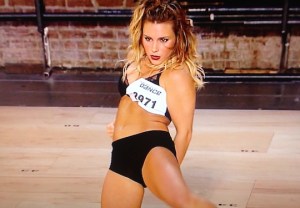 So You Think You Can Dance‘s auditions are as finished as Kim Kardashian‘s singing career — ugh, remember that mess? — which means we’ve probably already met our Season 11 champ.

The question is… did we meet him or her during tonight’s Atlanta tryouts? I wouldn’t be shocked if the answer is “WooHoo!” (aka Mary Murphanese for “Yes!”).

After all, we met a very handsome, very polite young fella with the effortless, swooping grace of a barn swallow, a pretty powerful (and powerfully pretty) gal who scored with the coveted “beast” label from Uncle Nigel, and a returning hip-hop tapper with enough personality to make the judges panel laugh and clap with glee.

Oh, sure, we had to endure that overly long, deeply unfortunate segment starring a Dragon House member badly overreacting to a little constructive criticism — wouldn’t those precious minutes have been better spent introducing us to the montaged group of crazy-talented (and, yes, shirtless) fellas? — but they can’t all be winners.

In fact, in Season 11, only one can be a winner — since the show is nixing the boy-girl split this time around. (Change approved!)

With that in mind, let me get to the business of naming my Top 5 auditions from tonight’s Atlanta audition telecast:

5. Cristina Moya-Palacios | Contemporary chica whose brother underwent 20 surgeries in 10 years made me forget the fact that I hate sappy, pre-audition packages with a very evocative style and an ending that flirted with the concept of death. Lovely!

4. Angelina Granitz | Awkward, nervous chick — with an adorably sweet connection to her older brother — completely transformed herself into an elegant, sophisticated artist the moment the music kicked in. Her off-kilterness and technical mastery could be a very tough combination when the voting lines open.

3. Erik ‘Silky’ Moore | You’ve got to love a guy who auditioned in Seasons 5 and 6 — then spent the last few years studying winners’ trajectories before returning to compete again. There was a lightness and humor to his expressions, and yet a haunted quality, too, that captured the essence of his grandmother’s hospitalization for mental health issues. I swear, the kid’s movement alone brought the horror electroshock therapy to vivid life — and his soundbites were killer. That’s no small feat.

2. Marissa Milele | Self-proclaimed “princess warrior” (the reverse is totes trademarked by Xena) danced with so much brute power and purpose that I kinda wanted her to tear a floorboard from the stage and start wielding it like a sword. Plus, let’s be honest: The Season 10 “green mile” evictee deserves a spot in the finals based solely on those rehearsal-package handsprings alone. Day-um, girl!

1. Ricky Ubeda | Tell me I’m not the only one who got the same exact “Yowza!” vibes from Ricky that Melanie Moore conjured up in Season 8. Like, a “Wow, this kid is such an effortlessly beautiful, emotionally stunning and thoroughly likeable performer, I can’t really see him losing” sensation? Sure, it’s too easy to hand him the Season 11 crown, but if I lived in Vegas, I might lay down a $20 that he’ll turn out to be The One.

What did you think of tonight’s SYTYCD Atlanta tryouts? Who were your favorite auditioners? Sound off in the comments, and for all my summer TV news, interviews and recaps, follow me on Twitter @MichaelSlezakTV!