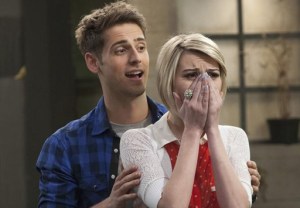 ABC Family’s Baby Daddy wrapped its third season Wednesday, but did not wrap the ongoing Ben-Danny-Riley love triangle, which only became more complicated as the episode reached its “conclusion.”

Below, executive producer Dan Berendsen discusses his thought process behind tonight’s emotional finale, and where the show’s central love triangle will go from here. (Plus, could a Bonnie/Tucker connection ever happen?)

TVLINE | Confession: I gasped when Danny and Riley almost kissed. Why didn’t you let them go for it?
Because I don’t think they’re there yet. They have a lot of places they need to grow. If you chart this, she’s just realizing that she might have feelings for him; I think that was a very honest moment when her emotions snuck up on her after he told her was leaving with another girl to start his future. The scene before that, she was in front of a huge crowd singing a love song to Ben, who she really does believe she loves. But in the back of her mind, there’s a thing about Danny, and it surprised her in that moment. … Also, Danny being who Danny is, he will never kiss his brother’s girlfriend. He’s a stand-up guy, and he’s never going to get in the way of his brother’s happiness. That’s one of the reasons he’s leaving. TVLINE | I can’t believe none of the characters have picked up on Danny’s feelings. He has the worst poker face.
It’s funny the way the show’s evolved, because [Derek Theler] really is Danny in real life. Originally, his character was going to be a little more Ben-like, and he was going to be out with a different girl every night — that professional athlete stereotype. But you just wouldn’t believe that with him. When he dates, he almost always falls in love. He wears his heart on his sleeve, as does Derek.

TVLINE | Good call. So will we see Danny leave and come back, or does he not leave at all?
He leaves and comes back. The start of the season is going to explore where we left off. Ben and Riley are finally a couple, but he just witnessed that exchange on the roof. And that episode was the first time Ben ever had a hint that his brother might have feelings for Riley. And it’s going to eventually come out that Riley already knew about Danny; if you remember, in Season 2, she heard that phone message from him, saying he’s in love, then deleted it. That’s going to come out. In the middle of the season, we’re going to break up this love triangle a little bit, and by the end of the season, you’ll know for sure who Riley is going to be with. The end of Season 4, you’ll know the fate of the love triangle.

TVLINE | Have you always had the same brother in mind, or has it changed?
I’ve known since halfway through Season 1. I suspected, but I’ve done enough shows — like The Nine Lives of Chloe King — where it changes based on the actor’s chemistry with people. But this has pretty much stuck since the beginning. TVLINE | Speaking of chemistry, let’s talk about Bonnie and Tucker. Is that ever going to happen?
I think we’d probably be accused of jumping the shark, but it’s true, they do have this amazing chemistry together. I think they have an odd attraction for each other. Bonnie dated his father this season, so that’s not a huge [leap]. There’s obviously something in the Dobbs men that she finds attractive. What I like about these two characters is that they’ve developed into total frenemies; they can’t stand each other unless they need each other. … There’s a love/hate thing between them, but I don’t think it’s sexual. I can’t say “no” ever, but that’s certainly not part of my plan.

TVLINE | Should we expect a time jump between Season 3 and 4?
We typically don’t. I think we’ll be coming back within a week or two after the finale. We ended the season with such high emotions, I don’t want to cheat the audience of seeing that play out. Ben’s not going to be like, “Hey, remember when you were on the roof with Danny a month ago?”

Baby Daddy fans, how do you think the love triangle will play out? Are you Team Ben or Team Danny? And what are your thoughts on Bonnie and Tucker? Drop a comment below!