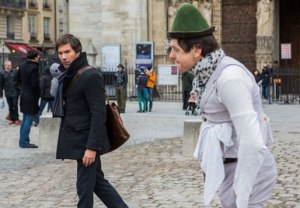 Tonight’s Season 3 premiere of Perception (TNT, 10/9c) picks up exactly where Season 2 left off, with Daniel Pierce now in Paris — but his guest-lecturing duties are about to be sidelined by an international whodunnit.

Below, Eric McCormack previews Pierce’s French connection, a possible romance and more from the upcoming season.

TVLINE | Last season ended with Pierce going to Paris, which was a pretty bold move. How is he acclimating to the change? Lewicki isn’t with him anymore.
Exactly. It was a bold move. He did it for love. He’s pursuing Miranda, the cellist from his past, and it’s a bold move for anybody to pursue love — but particularly for someone living with paranoid schizophrenia. This is a dangerous thing, to open his heart, but particularly without a support system, without Lewicki, without Kate, without his classroom and his routine, it’s a big deal. So the fun of that first episode is we start in Paris and he thinks he’s happy as a clam, but it’s been a few weeks there and he’s about to start decompensating. It’s not a safe place for him. The history and the dark corners are going to start playing into all his worst fears.

TVLINE | How will that affect his relationship with Miranda?
The thing is it takes two to tango, and it’s one thing for someone with the condition to try and open his heart and try to embrace things. But also, the other person has to be willing to be a caretaker and live with the roller coaster that is schizophrenia, and I think the audience will see in that first episode that Miranda might not be the one who’s most prepared for that.

TVLINE | It seems he might have more hallucinations than usual going into this season. That’s the exciting thing about the first episode. It’s this place that he went to that he thought he would find so much academic reward, and the history of it, and the solace of not having to work, is in fact very quickly going to turn on him. His hallucinations become very intense and he really can’t tell what’s real from this and he doesn’t have any of his tells to go by. It’s a very dangerous place for him to be.

TVLINE | How does everyone else cope with his moving?
No one is very happy about it. Lewicki and Dean Haley are working hard to get him his job back. And Kate flies across the Atlantic to help him, and rescue him. We won’t be in Paris long. Soon enough, the routine will get back to it.

TVLINE | It didn’t seem like Paris would be a long-term solution for him.
It’s not a solution at all. He’s running to something, but ultimately running away from something. I think what’s fun, as we started to discover over the course of the season, is that the act of doing it was something that emboldened him. The Pierce that we see in Season 3, not just in terms of how he deals with the world and how he deals with crime-solving, but how he deals with his feelings for Kate. We’re going to see a man that has cracked the egg a little bit and literally is coming out of his shell. That’s a big story point as the season goes on, Pierce starting to come face to face with what the audience has been wondering all along: “How does he feel about Kate?”

TVLINE | Speaking of Kate, are there any big moments for the two of them in the first few episodes that are coming up? Other than her flying across an ocean for him.
We’ve always had these kind of moments that love where the audience, or the “shippers” if you will, get a real sense of these two people that are dancing around an elephant in the room… and they dance apart again. And of course you have Donnie. This season Donnie and [Kate] will be getting back together, closer and closer, which of course is not good news for Pierce. The fact that she is heading back down the road that she was at, towards her ex-husband, is also something that lights Pierce’s fire.

TVLINE | Is there any other romance on the horizon for Pierce this season?
There is. There’s a couple of really fun episodes that take place in the art world, where Pierce has a fling. But ultimately those moments take a big toll on him. Revealing himself to people is hard, which is why the depth of the relationship he has with Kate starts to become so much more important.

TVLINE | We kind of saw that with Caroline as well, where he didn’t fully get over her. Exactly. She couldn’t handle it either. Even though she’s a doctor, she couldn’t really handle who he is. And of course Natalie, who was based entirely on his vision of Caroline, was the perfect woman because she doesn’t exist. His relationship with Natalie will change this year too. That’s something as time goes on, he realizes he can’t cling to forever.

TVLINE | And Scott Wolf is a regular now. Do you get to play off of him a bit more?
Yes, as much as possible. His growing relationship with Kate is a big runner throughout the summer, and there’s a couple of episodes where Pierce and Donnie really get to do stuff together, which is a lot of fun. They’re such an unlikely duo, that we have a good time together.

TVLINE | Are there any manifestations you’re excited for this season?
There’s one I’m very excited about; John Glover plays the devil, and there’s a whole episode, very much religious-based, in which Pierce is constantly debating, which is probably one of my favorites this season.