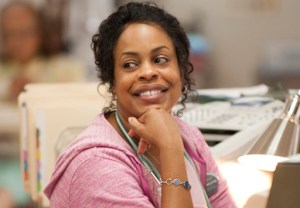 Niecy Nash‘s bold looks and over-the-top persona made her a household name, so it’s understandable the actress was “nervous” to take on the decidedly unglamorous role of Nurse Denise “Didi” Ortley in the HBO comedy Getting On. As it turns out, she had absolutely nothing to worry about.

RELATED | TVLine Items: Getting On Renewed for Season 2

The harsh, fluorescent lighting of the show’s hospital set may not have been flattering — Nash playfully calls it “the worst lighting God ever created” — but it forced her to step out of her comfort zone, and into the kind of role she knew she was born to play.

“I count it all joy that this group of people was able to see past me in a way that most have not up until this point,” Nash tells TVLine. “They saw what I knew was there all along, but the industry was taking its time casting me in that sort of role. I feel blessed to be able to play Didi.”

And it’s for just that reason TVLine included Nash as a Dream Emmy Nominee for Outstanding Supporting Actress in a Comedy Series. With every flippant eye roll and brutally honest observation, Nash’s Didi breathed life into the dark comedy — even as everyone was, quite literally, dying all around her.

We caught up with Nash to discuss the finer points of the show’s six-episode first season, including her relationships with co-stars Laurie Metcalf and Alex Borstein — whom she calls her “sisters from another mister” — and how she really felt about getting puked on by Oscar nominee June Squibb.

TVLINE | You had the very first line of the pilot, about the “feces” in the lounge. That was quite a way to meet Didi.
“There’s a turd on the chair in the lounge,” yes. [Laughs] It was a very interesting way to meet Didi. Because she stands so fully in her truth, and because she’s so utterly simple and can be taken at face value, I just thought it was delicious.

TVLINE | And I thought the way you, Alex Borstein and Laurie Metcalf dealt with that situation was such a perfect way to show how differently your characters operate.
Absolutely. And I had a respect for both of those ladies prior to working with them. Sometimes, depending on who’s working in a scene, the other two are watching, and it was almost like a master class. I would get so sucked into their subtle nuances that I’d be like, “Oh, shoot. I have a line!” You can’t get distracted. One of the fun things about filming, I will say, is that we’re given a little liberty. The writers are married to their words, but we’re given a little liberty to go off-book and see if we can find something. That’s more reserved for myself and Alex Borstein; Laurie Metcalf is like, “They wrote the words, I’m saying the words.” She’s like, “Whatever you’re doing, do that over there. Because when I’m in the scene, we’ve got to do things by the book.” Improv is not her lane. I love their characters, but I’ve also come to think of them as my sisters from another mister. We really do have a connection off-camera, as well.

TVLINE | Can you remember a specific moment that you improvised and they kept?
In the first episode, as we’re preparing Lilian’s body to be picked up, I went off on this whole tangent about the Jacksons and how they all have really great teeth. [Laughs] You know, Randy, Latoya, Janet … that was just me making it up.

TVLINE | Where did that come from?
[Laughs] I have no idea! We were just talking about teeth, and Nurse Dawn tells Nurse Didi that Lilian’s lower teeth were decent, and I said, “You know who had some good teeth? Those Jacksons. Every last one of ’em.”

TVLINE | In getting to sneak those improv’d lines in there, would you say that made Didi more like you?
More like me? No, only because I don’t think I’m anything like Didi. Where I’m outspoken, she’d hold it in. Where she’d give someone a pass on something, I absolutely would not. I don’t think we’re alike; I just think I was able to find other layers to her, and I only went as far as I thought the creators and the writers would allow. She’s one of my favorite people to play because she’s so unlike me. Most of the time, I’m asked to do more. You know, “Can it be bigger? More hair. More boobs. More eyelashes. More makeup. More funny. More over-the-top.” And this performance is so small. A lot of times when I work, it doesn’t seem like work to a lot of people, because I’m basically playing myself. The biggest compliment I received was from someone who knows me really well, and they said, “After the first scene, I forgot I knew you.” And that’s the goal, for you to disappear. It’s the essence of what we’re all trying to do. And then I have some of my really close friends, like Sherri Shepherd and some of my Soul Man co-stars, who told me to get my Emmys dress ready. I said, “What?! What are you even saying right now? Everybody calm down.”

TVLINE | You should just go to the Emmys in full scrubs.
[Laughs] I’m telling you, because that character is so scrubbed-down, and because HBO was very much like, “Take off that hair, take off that make-up,” on the weekends, I’d get all dolled up. My husband would be like, “Where are you going?” And I’d say, “I don’t know! I just feel like I look like an old hag all week long.”

TVLINE | Was that in any way a relief for you, getting to tone down your look and focus on the work?
Not at first. We were all horrified. They take you out of your makeup, they put you — my character, at least — in a pink bag, they put you under the worst lighting God ever created and they put a camera right to your face. So I was a little nervous, and I was very much in my head about how horrible I thought I looked. Then we were joking around on set, saying, “If we’re lucky, we’ll all be on the cover of a magazine, and the caption will read, ‘These brave women.'” [Laughs] In Hollywood, they tell you you have to look pretty and you have to be dolled up, and this is everything but that. So after I wrapped my mind around this being such an unglamorous thing to do, I became a lot more comfortable. HBO put us through a two-week boot camp where we served the elderly and followed nurses around their shifts. Some of it was very unpretty, so it made sense. TVLINE | Speaking of “unpretty” situations, did you ever imagine Oscar nominee June Squibb would be puking on you and calling you a “fat dyke”?
Did I ever imagine it? No. Did I love every minute of it? Yes. I told her, “You are the meanest, nicest lady I’ve ever met.” She plays mean so very well, but is the sweetest. … And she’s absolutely brilliant, so I wasn’t surprised at all [when she was nominated for an Oscar.] Some of that stuff she said to me, she said, “I’ve never had a conversation with another human being in which those words were ever spoken.” It was just delicious to be a part of something where everyone was so committed. She was just an absolute joy to work with and to watch. There was no one take that was like another.

TVLINE | I find myself re-watching the “Language Barrier” scene surprisingly often. Did you have a favorite moment like that?
You know what, that has to be one of my favorite moments. And what’s interesting about that scene is that it’s the first scene we shot. And what I think is equally delicious is that we didn’t know what the woman, who was speaking Cambodian, was going to say. So I didn’t know how Alex was going to interpret what she said, and she didn’t know how I was going to relay that message to the man on the phone. It was, to me, comedy at its finest. You have these women, and neither of them know what the other one is going to say or how they’re going to say it, but you’re trusting that they’ll deliver it in a way that’s not only believable, but funny as well. That was just a gift.

TVLINE | How many takes did you need for that scene? I can’t imagine how any of you kept straight faces.
You know what, I will tell you this about Niecy Nash: She’s very unflappable. I’m never going to ruin a take because I laugh. Never, never, never. Those are the best ones. I didn’t laugh on Reno! 911, so I just made a habit of it. You might have some cameramen snickering in the background, but it’s not going to be me!