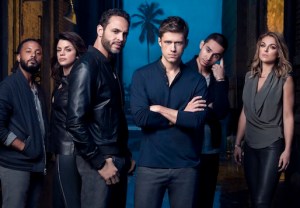 USA Network’s Graceland re-opens its doors this Wednesday at 10/9c, and it’s not long at all before FBI whiz kid Mike Warren finds cause to slip away from D.C. and visit the sun-baked beach house — though what he finds there may surprise him. Guns downstairs? Unlabeled fridge finds? Strange bedfellows? Oh, and who’s the new guy…?

Jeff Eastin, who previously created USA’s White Collar, shared with TVLine a look at the changes that Graceland the show has undergone, all while maintaining (if not amplifying) its darker, sexy tone.

TVLINE | First, talk about any tweaks that you made going into Season 2. Was there any element that you felt didn’t quite serve the show best in Season 1?
Sure. I mean, look, you learn a lot every season, and you can probably see this in the first couple of episodes, our realizing that we have a great ensemble here. Aaron [Tveit, who plays Mike] and Daniel [Sunjata, Briggs] are great, but we have a really amazing cast all the way through. So one of the first things we did was sit down with USA and say, “You know what? We should really embrace this.” Second, there was a decision to really go serialized this year, to take out the case of the week element and really make it about the characters. So, you know, this year Johnny (Manny Montana) really comes to the forefront, and Jakes (Brandon Jay McLaren) has some great storylines early on, Paige (Serinda Swan) really takes on a huge role, and Charlie (Vanessa Ferlito) and Briggs… well, not to spoil anything, but their relationship has changed quite a bit.

Also, as you know, Graceland was a real passion project of mine, and it was very dark. I said [to USA], “You know I love working with you guys,” which I did, but I was very worried about sort of running it through that “blue sky” filter and suddenly a heroin addiction might become, you know, an addiction to carbs or something. But they said, “No. No. No. We want to evolve the network. We really want to go in this darker direction.” So that was something else we decided, to embrace this darkness. We touched some pretty dark places last year, but this year it gets very, very dark.

TVLINE | The way that you left things, was it always your plan to return Mike to a house that’s filled with all sorts of tensions? That it wasn’t going to be some big, warm, fuzzy reunion?
Yeah. I mean, that’s just good television to begin with. But the idea was, one, to show the evolution – that idea that if you left your high school and you came back, suddenly your friends are still there but things have changed. We wanted to sort of show that alienation when Mike returns then dive into the tension that hopefully will make the show really interesting going forward.

TVLINE | How would you describe the state of the Mike/Briggs relationship?
That relationship really does drive the series, at its heart. We say it several times in the first season, that Mike and Briggs were sort of clones in that they both came out of Quantico, they both were top of their class, but Mike has an idealism that’s been drummed out of Briggs. For Briggs, I based the entire first season on the Chinese proverb that says, “If you set out for revenge, dig two graves,” and thematically that’s what I really wanted to see. Briggs started off like Mike, as this guy pure of heart, but the circumstances had broken him. They hooked him on heroin, they killed this woman he loved, and he set out on this revenge path. And what he doesn’t realize at the time — or maybe he does and he doesn’t care — is that he’s done so much damage to the people around him, including potentially destroying Charlie. Coming into Season 2, it’s really about this idea that Briggs wants to repair who he was. Meanwhile, Mike is starting to realize that maybe Briggs wasn’t so far off, that playing that gray area is a better way to get things done, and what ends up happening is those stories collide relatively quickly, around Episode 4. Without giving real spoilers, Mike starts to realize that the only way to succeed in what he’s trying to do [crack a major case] is to get that old Briggs back, the Briggs who is a master chess player and would do dark things. That collision ramps in the back half of the season.

TVLINE | Out of the other roommates, who would you say has changed the most during Mike’s absence?
Probably Paige. One of the reasons for that is because Serinda Swan came a little late to the show, and there’s always an evolution of learning how to write for a character. For the pilot, Daniel was sort of the surprise. He’d just come off Rescue Me and mentally he was a lot different from the Paul Briggs that I had conceived of in the script. Daniel is an amazing guy, but he came in just completely different. I mean, I had described him as the surf bum with long Comanche hair…..

TVLINE | A bit more Patrick Swayze-in-Point Break.
Exactly. He really was Swayze in Point Break. But Daniel walked in and literally, two minutes into the audition, Jeff Wechtel at USA looked at me and mouthed, “He is it.” And I nodded my head because he had blown us away by taking my words and completely reconceiving them into this new character. I had to kind of go through that evolution with all of the characters, Charlie probably the second most. But with Paige, I never got the chance in Season 1 to find her rhythm, so it was very intentional this year to look for that Paige storyline, and Serinda herself is very involved with…

TVLINE | Raising awareness about human trafficking. She told me at Upfronts about the storyline she pitched.
Yeah, she’s really big on fighting sex trafficking and things like that, and when she mentioned this to me over the break, I thought, “That’s a really interesting storyline to play into.” And as she may have told you, her character goes to some really, really dark places. I would say that the two episodes that focus heavily on that, Episode 6 and Episode 9, are probably the best things I’ve ever worked on professionally. They’re dark, and beautiful, and they’re really, really intense episodes. I should probably give a shout-out to my directors on those, Russell Fine and Larry Teng, who ultimately knocked it out of the park, and then Dan Shattuck who wrote both episodes..

TVLINE | How does CSI: NY alum Carmine Giovinazzo figure into the season?
I love Carmine. My very first television show was Shasta McNasty on UPN. We lasted a season, and actually people would kill for the ratings that we had back then, which was like six to eight million people a week. Carmine was the star of this crazy goofy thing that got, I think, the worst reviews in television history, possibly, but he really blew me away, so I’ve been looking to do something with him again. [After CSI: NY ended] he called me and said, “Hey, I would love to work with you,” and what I wanted was to really use him in a long arc. So, his character, Sid… I won’t go into too much detail but he really becomes our Big Bad, especially for the back half of the season. Carmine is an exceptionally talented guy, so I’m very, very excited.

TVLINE | What’s the larger purpose of romantically involving Mike with his new FBI supervisor (played by Haven‘s Emily Rose)?
It’s twofold. One, we’re making a sexier show — and within that I don’t just mean a lot of skin, though we actually show a lot more skin this year, but I want to really play into the relationships, and relationships aren’t just people talking, they’re people in bed together. Two, we left Mike and Paige in an interesting spot last year, and this will create a conflict. For Mike, the women represent his two worlds – Jessica is colder, efficient and very much represents the ideals of D.C., where Mike believes his heart lies, and Paige represents Graceland and more of a companion presence.

TVLINE | Lastly, the cassette tape that implicates Briggs in FBI officer Juan Badillo’s murder is still floating around somewhere, right?
It is. [Former USA exec] Bill McGoldrick, who’s now running [development at] Syfy, had a very good idea last year, which was to close up as much of the mythology as we can so we can start fresh, but that’s the one thing we wanted to carry forward. Those bodies will not lie still, the bones will not stay buried, and the tape is a really nice way to remind us of that.