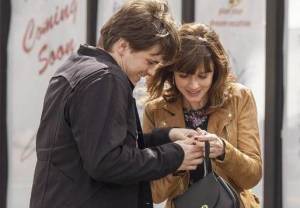 Us & Them is officially gone and forgotten, at least as far as Fox is concerned.

A network insider confirms to TVLine that the six produced episodes of the Jason Ritter-Alexis Bledel romantic comedy will not air this summer after all.

In fact, they will never air (not on Fox, anyway).

PHOTOS | Fall TV Preview: Your Complete Guide to All the New Shows

As TVLine was first to report back in October, Fox — unhappy with the quality of scripts as they were coming in — trimmed the show’s episode order from 13 to six. The (now-scuttled) plan was to burn off the episodes at a later date.

Us & Them was a single-camera adaptation of the British series Gavin & Stacey, in which two very different people try to make a long-distance relationship work.