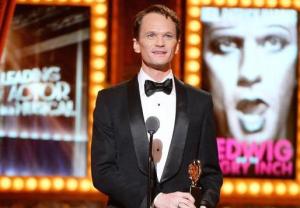 If you thought the Tonys ended when A Gentleman’s Guide to Love and Murder walked off with the telecast’s last award (for Best Musical), boy, are you in for a surprise. Now, the fun really begins, as TVLine names its own winners — and losers — in a variety of, shall we say, “alternative” categories. And the nonexistent statuettes go to…

MOST TIRELESS PERFORMER | Four-time host Hugh Jackman bounced up and down – literally bounced up and down – for nearly five minutes to open the show and hardly slowed down after that. When he wasn’t flirting with the audience, he was jumping into the After Midnight dance routine, singing introductions or doing a Music Man rap with LL Cool J and T.I. All of which means we can skip our cardio this week, right? Right?

NEXT BEST THING TO A VH1 DIVAS LIVE CONCERT | There were more amazing pipes on display when After Midnight’s Fantasia Barrino, Gladys Knight and Patti LaBelle teamed up to sing “On the Sunny Side of the Street” than you’d see at a plumber’s convention. But later, after Looking leading man/Broadway babe Jonathan Groff teased us with a Travolta-skewering introduction of “the Wicked-ly talented” Idina Menzel, she outbelted ‘em all during her performance of “Always Starting Over” from If/Then.

WORST PRESENTER | We’ll give Clint Eastwood credit for poking fun at his ill-fated chair bit from the Republican National Convention during a peek backstage, but aside from that, Dirty Harry was a stammering mess. It wasn’t even until he was finished with his first of two (two!) spiels that he realized he could have been reading off the TelePrompter the whole time!

BEST DORIAN GRAY IMPRESSION | When Sting came on and sang the title song from his musical, The Last Ship, how many of you had to check your calendars to make sure it wasn’t, say, 1990? Show of hands? The dude never seems to age. At all. (See also: presenter Judith Light.)

STRANGEST PERFORMANCE FROM A SHOW THAT ISN’T NOMINATED | The boxing match that Rocky staged was impressive and all, but it wasn’t the kinda thing that gets a tune stuck in your head. In other words, without a hit, the champ just didn’t, ahem, pack a punch.

MOST GRACEFUL UNDER PRESSURE | Current Wicked stars Christine Dwyer and Jenni Barber had to know that no one wanted to see them duet on “For Good” to honor the show’s 10th anniversary. We wanted Kristin Chenoweth and Idina Menzel, of course. Yet they did a lovely job of filling the Broadway legends’ iconic tiara and pointy black hat.

PERFORMANCE LIKELIEST TO BE CALLED LEGEN… WAIT FOR IT… DARY | As “killer” as the quick-witted love (triangle) song from A Gentleman’s Guide to Love and Murder was, it was always gonna be Neil Patrick Harris’ turn in a Farrah wig and miniskirt that got everybody talking. And, though the eventual Best Lead Actor in a Musical victor is no John Cameron Mitchell (who is?), he ensured that his rockin’ rendition of “Sugar Daddy” would be memorable by taking to the audience to – and this is a partial list! – give Sting a lap dance, steal Samuel L. Jackson’s glasses off of his face and plant a big kiss on real-life hubba-hubba hubby David Burtka.

BEST PERFORMANCE FROM A SHOW THAT ISN’T ON BROADWAY, MUCH LESS NOMINATED, BY SOMEONE WHO ISN’T IN THAT SHOW, ANYWAY | Jennifer Hudson raised the roof with a “preview” song from Finding Neverland. But couldn’t it have waited until the show had come to Broadway – or at least NYC – and then, maybe shone this spotlight on whomever sings it in the show?

OK, your turn. What did you think of the Tonys? What alterna-categories did we miss? Hit the comments. (And see below for a list of the major winners.)

Best Play
All the Way

Best Revival of a Play
A Raisin in the Sun

Best Revival of a Musical
Hedwig and the Angry Inch

Best Performance by an Actor in a Leading Role in a Play
Bryan Cranston, All the Way

Best Performance by an Actress in a Leading Role in a Play
Audra McDonald, Lady Day

Best Performance by an Actor in a Leading Role in a Musical
Neil Patrick Harris, Hedwig and the Angry Inch

Best Performance by an Actress in a Leading Role in a Musical
Jessie Mueller, Beautiful — The Carole King Musical

Best Performance by an Actor in a Featured Role in a Play
Mark Rylance, Twelfth Night

Best Performance by an Actress in a Featured Role in a Play
Sophie Okonedo, A Raisin in the Sun

Best Performance by an Actor in a Featured Role in a Musical
James Monroe Iglehart, Aladdin

Best Performance by an Actress in a Featured Role in a Musical
Lena Hall, Hedwig and the Angry Inch