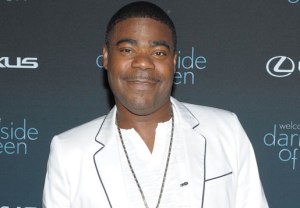 The wreck, which involved Morgan’s tour bus, two tractor-trailers and an SUV, left one person dead and four others hospitalized.

UPDATE: The dead man has been identified in various reports as comedian James McNair, known by the stage name Jimmy Mack, who was traveling with Morgan. Morgan’s assistant, Jeff Millea, and another comedian, Ardie Fuqua, were also listed as in critical condition.

Harris Stanton, another comedian on the bus, was treated and released Saturday. Two other passengers on the bus were not harmed.

Morgan’s limo-bus reportedly overturned after being hit by a tractor-trailer. The rig’s driver, Kevin Roper, has been charged with one count of death by auto and four counts of assault by auto, per The New York Times.

“Tracy remains in critical condition at Robert Wood Johnson Hospital. He sustained these injuries in an accident that occurred early this morning as one of several passengers in a chauffeured SUV returning from a tour date in Delaware. His family is now with him and he is receiving excellent care. We don’t anticipate much of a change in his condition today but will provide a further update once more information becomes available.”

Morgan reportedly was returning from a Friday-night performance at the Dover Downs Hotel and Casino in Dover, Delaware.