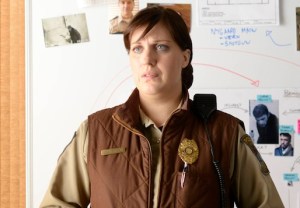 THE EPISODE | “The Heap”

THE PERFORMANCE | It could not have been easy, an admittedly unknown actress landing the lead in TV’s take on a revered film, all but following in the footsteps of Academy Award- and SAG Award-winning actress Frances McDormand. But Allison Tolman is gettin’ the job done, you betcha.

In the first eight episodes of the FX drama, Tolman gave us a character to root for like none other — Molly Solverson, a police deputy in the brittle burg of Bemidji, Minn. Seemingly meek and sadly overlooked by superiors, Molly got a bead on a coupla killer cases and has refused to let go until justice is served. This week, as Molly returned to duty after being (accidentally) shot, Tolman led us on a tour of the crime solver’s emotions — first as she struggled to tell clueless colleague Bill Oswalt that he was “still… wrong” about Sheriff Thurman’s killer. (“For Pete’s sake!” she blurted, nearing tears as Bill served up a quite lousy Lotto analogy. Then, her eyes rolled as he trumpeted the cake, with a “frosting assault rifle,” baked her in her honor.)

Later, Tolman gave us a much lighter Molly, as she coyly confided in Ida about her “suitor” — Gus, whom she nudged into the promise of a first date, complete with chainsaw carving and pie-eating contests.

And then… it happened. A one-year time jump that threw us into a world where Gus and Molly are married and expecting. But as complete as that life would seem — “We’re doing good, ya know,” Molly tried to convince herself, in bed with the hubby — the Thurman and Hess murders still gnawed at her. As she noted to an FBI agent who’d obviously heard from her many a time, “A lotta people are dead,” including the 22 victims of the Fargo massacre. But with two weeks to go, we’re feeling good that if anyone can reel in the first domino that set in motion these tragic events — Billy Bob Thornton’s Lorne Malvo — Tolman’s stalwart lawman can. HONORABLE MENTION | Season 3 of HBO’s Veep, focusing on the train-wrecky presidential campaign of titular second-in-command Selina Meyer, has been a comedic tour-de-force for series star Julia Louis-Dreyfus. But Sunday’s “Debate” — in which Selina developed an eye-twitch right before a crucial first face-off against her four opponents — turned out to be arguably the funniest half-hour in the show’s three-season history. As Selina forgot her “three Rs” approach to immigration — “Reaffirm, Reform, Renew” became “Reform, Reaffirm, Repel” (against “criminals, obesity and torturers”!) — we saw a powerful woman come right up to the edge of an epic meltdown, and then turn it around as her errant “wink” sent one of her rivals (Isiah Whitlock Jr.’s Secretary of Defense Maddox) into a wildly funny spiral. As Maddox ended his bellyflop by declaring “we all want to live above the hole,” Louis-Dreyfus’ eyes twinkled. “That sounds like a slogan, folks,” she smirked, knowing that no matter what happened, her political fortunes would live to see another day. And as fans of great TV comedy, we celebrated along with her. HONORABLE MENTION | Though Sansa Stark’s evolution on Game of Thrones hasn’t been as dramatic as her sister’s – after all, the redhead hasn’t gleefully offed anyone… yet – Sunday’s episode proved that the meek little girl who left Winterfell is gone for good. We can thank Sophie Turner for that. Bit by bit, the actress has used Sansa’s misfortune to steel her performance, taking every physical blow and emotional sucker punch to create a Sansa who is cunning, smart and willing to do what it takes to survive. She churned out some very believable tears while being questioned about her aunt’s death, later matter-of-factly informing Littlefinger that she did so to save herself – and not necessarily him. Still, Turner’s radiance as she donned Lysa’s dress at the end of the episode was an indication that she knows just how to soothe the manipulative Lord Baelish, and we can’t wait to see what out-for-herself twist Turner plays next.