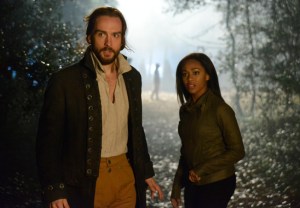 If waiting for new Sleepy Hollow episodes seems like your own personal stint in Purgatory, take heart: Fox on Monday let us know exactly when Abbie and Ichabod’s mission will resume.

The supernatural drama will return on Sept. 22 at 9/8c for a second season, the network announced at a screening and panel discussion held at California’s Hollywood Forever Cemetery.

Also on Monday, the series posted the following behind-the-scenes photo to its Facebook page with the caption, “What confrontations will ensue in Season 2?” Peruse, then scroll down. That’s gotta be Abbie in the pigtails, right? Maybe in a flashback? And could the woman sitting opposite her possibly be her mom? (Remember, series co-creator/executive producer Alex Kurtzman teased that we’d “perhaps” meet Mama Mills in the drama’s second season.)

Hit the comments with all manner of speculation about what will befall Mills and Crane in Season 2!