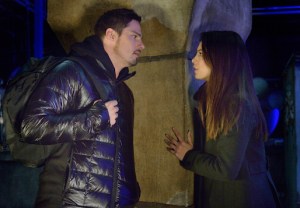 The CW’s Beauty and the Beast resumed Season 2 on Monday right where we left off, with Vincent being led away in handcuffs, arrested for Kurt Windsor’s (gruesome, but not Game of Thrones-gruesome) murder. But there’s no keeping a good cross-species man down…

With Vincent thrown behind bars, into presumably hostile environs, Priority No. 1 is tracking down the gem that can keep him from beasting out. Easier said than done! For one, Cat has a Dickens of a time getting access to her beau, having (oops) dropped her badge in the snow and then (hubba-hubba) showing up at a precinct in her PJs.

But with an assist from Gabe (and some borrowed blues), Cat gets inside and covertly elicits from Vincent his hiding place for the gem. She and Tess then head out to retrieve the gem (from inside one of Vincent’s brothers’ headstones), but not before JT blurts out — in front of Cat and Gabe — that he and Tess had sex. (His reveal came in the midst of grumbling about Tess dropping him off far from the station, lest people see them together, though he’s clearly missing her signals that she kinda likes the geeky lunk.)

After fetching the gem, Cat frets that Vincent could get hit with a life sentence if/when found guilty, but Tess does her best to see the bright side, echoing many a Beastie by saying, “You’re not some fragile, newbie couple. You’re epic!” That’s been made into a meme by now, yes?

Cat and Gabe realize how damning the evidence is against Vincent — namely, the “discovery” of Kurt Windsor’s heart in Vincent’s fridge. Who’s setting Vincent up? Some eyes, including JT’s, are on Gabe, but Mr. DA swears he’s not playing dirty in the game of love. (As he puts it, “For the record, I have not been holding onto organs in case you and Vincent got back together.”)

As Cat confronts another suspect — her father (who cops to nothing but won’t shed a tear if Vincent is locked up for a long time) — Vincent picks a fight with a jailbird, necessitating his transport by ambulance to the hospital. During the ride, Vincent sheds the gem and beasts out to escape. He later resurfaces on Cat’s rooftop, announcing, “I’ve come to say goodbye.” For while he is willing to make a sacrifice for Cat, he won’t let her do same by testifying in his defense. His one parting request: “One last night where we can love each other as much as we do right now.” Well, sure!

That leads to a “shower scene” which did zero justice to the words “shower scene,” as the couple (briefly) hid out in Cat’s bathroom, ultimately necking — while 100 percent clothed — under the drizzling showerhead. Regardless, the awkward embrace is interrupted by Gabe, who has uncovered a money trail implicating Reynolds in the frame-up. When that lead turns into a literally dead end, it shocked even Reynolds, who urges Gabe to protect Cat, seeing as they’re apparently dealing with a powerful, unknown entity.

Vincent decides to go on the run, and while he and Cat briefly mull her coming with, they decide it’s best she stay behind — after all, like Snow and Charming, “I will always find you!” Or words to that effect. He slips away just before the cops come, setting the stage for an emotional hug between Cat and JT, as they commiserate over their loss.

But later that night, as Gabe lets slip a smile at seeing Vincent a “wanted” fugitive and Vincent looks out over the skyline, a crying Cat is sneaked up on at her apartment, a black bag thrown over her head….

What did you think of B&TB‘s summer premiere?