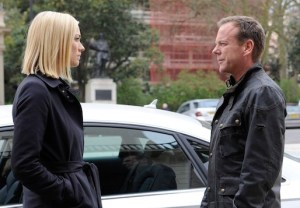 Fox’s 24, for all its accomplishments over the years, has seldom given us the female equivalent of Jack Bauer. (One could argue that as badass field agents go, the list starts and ends with G-woman Renee Walker, RIP.) But did disgraced CIA analyst Kate Morgan just join the short list?

This week on 24: Live Another Day, Jack laid out his demands to President Heller and CIA chief Navarro, in the name of thwarting Margot al-Harazi’s terrorist drone strike. On that list, alongside the always handy “field interrogation kit,” was the name Kate Morgan. And though Navarro at first balked at putting his Langley-bound black sheep back in the field, “Jack wants Kate, Jack needs Kate, Jack gets Kate,” Heller declared. Matt wants Kate, too, but that’s for another day.

To approach Rask, an arms dealer Jack had been working for (though for the right reasons!), Jack tells Kate he needs to “deliver” her as a CIA informant who recruited one of Rask’s men as a snitch. And since Rask’s men would then want to immediately interrogate her, Jack wants to shoot her up with drug that knocks her out. Hopefully Jack can get done what needs to be done (tricking Rask into loading a virus onto his laptop) before Kate awakes. “Just make it count,” she says before plunging the needle in her neck like a boss.

Of course, the plan goes awry. Rask has a drug to counteract the sedative, and soon enough Kate is awake and being hoisted up onto a hook, her arms shackled behind her. Belcheck is perched on a nearby roof poised to save Kate, but Rask first must load in the virus. In the meantime, Kate’s interrogators run some current through her, slash her leg… and power up a drill, Quinn Perkins-style. But just as Kate is about to meet that gnarly fate, just as you’re screaming for Chuck to show up and “flash” on kung-fu, MI5 agents storm in and start shooting up the place.  Amidst the melee, Kate throws her legs around her captor’s neck, wrests herself free from the hook, grabs his dropped dagger and with a swift, impressive-as-hell move, drives the blade into the guy.

Added bonus: Jack clicked ENTER on the laptop during the shootout, allowing Chloe to rifle through Rask’s banking records and find a cell phone attached to some recent, suspicious payments.

Elsewhere in the 4 o’clock hour:

* The British PM is now wise to President Heller’s possible Alzheimer’s diagnosis, and thus is second-guessing his counterpart’s judgement — including entrusting Jack Bauer with a covert op.

* Mark’s forgery of POTUS’ John Hancock on the papers promising Jack to Russia is at risk of being found out — as if he already hadn’t had bad enough an hour after coming face to stone-face with the Jack Bauer!

* Margot sent Simone, owner of The World’s Worst Poker Face, to chat up Naveed’s sister, to see how much she knew about his plan to get outta town. Simone clumsily tried to help the sister, but wound up stabbing her dead instead. (Oops?) Simone wound up getting smacked (though not quite George O’Malley’d) by a bus while chasing the sister’s horrified young daughter through the streets.

* Mole alert! We learn that Navarro, in cahoots with someone, framed Kate’s husband for the selling of secrets — and now computer wonk Jordan is on the verge of finding that out!