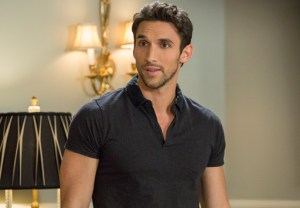 Any Devious Maids fan worth their salt knows not to trust Evelyn’s new bodyguard boyfriend Tony, and Dominic Adams tells TVLine we’re wise to remain skeptical — but not for the reasons we might think.

Below, Adams gives us a glimpse into the second half of the season, including how Adrian’s impending return will change Tony’s dynamics with Evelyn. Plus, could Mrs. Powell’s new boy toy be connected to the Beverly Hills burglaries?

TVLINE | We keep learning new, shady details about Tony. How much did you know about him when you got the part?
To be honest, not very bloody much. I knew that he was ex-special forces and that he’d be working with the Powells, but as far as Tony’s ulterior motives, I really had no idea.

TVLINE | I love the dynamic between Tony and Evelyn. Is that as much fun to play as it is to watch?
Rebecca Wisocky is a terrific actress, and it has been very fun for us to play. It’s developing into this real cat and mouse relationship; Evelyn was used to having a certain amount of control in the first season, which was how she was when she first met Tony. But as he started to get his feet wet and push back, it’s been interesting to see how she reacts to that.

TVLINE | You mentioned what she was like last season. Did you watch Season 1 before you started shooting?
I’ve watched most of Season 1. I have a friend who was in the pilot, so I watched that a long time ago, then I came back and revisited the season when I got the part.

TVLINE | You almost didn’t need to watch Season 1. It’s become a completely different show.
True, and that’s what’s so great about the show. It’s a fun, guilty pleasure. You can tune in and relax and enjoy without having to think too hard. You can pick it up at any point without being too lost. TVLINE | Tony and Evelyn did a good job of chasing Adrian away, but he’ll be back soon. What should we expect from his return?
You can definitely expect all sorts of shenanigans and game-playing. Evelyn and Adrian don’t give up or give in for any reason; they like to toy with each other and other people. It all has to do with power. They’re constantly jostling for control, and it’s going to be a fun ride that unfolds.

TVLINE | Each week, we’re learning about more people involved in the Beverly Hills burglaries. Might Tony be involved too?
[Laughs] Well, I don’t know. What do you think? Does Tony strike you as the sort that might be involved in robberies?

TVLINE | I mean, he literally wore that black burglar suit to scare Adrian away.
Ah, but was that a misdirection? A red herring on the part of the writers? Or was it a very clumsy, obvious clue to his true intentions? I think, ultimately, we’re all going to have to wait and see. Tony obviously has parts of him that aren’t all good, as do most of the characters on the show. Whether that entails robbery and murder, you’ll find out.

What say you, Devious Maids fans? Is Tony involved in the Beverly Hills burglaries, or would that be too obvious? Drop a comment with your thoughts on Season 2 below.